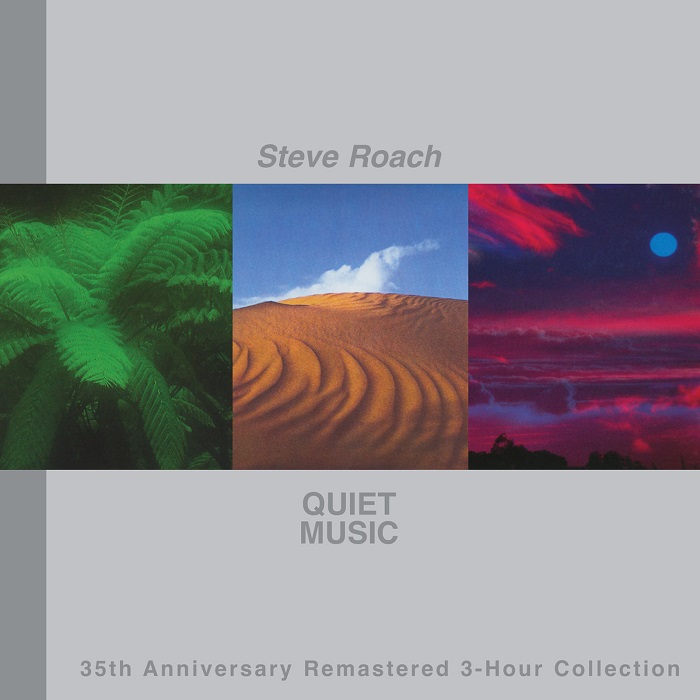 In the early 80s, much of Steve Roach’s music was first issued on cassette tapes, although Traveler and Structures from Silence (from 1983 and 1984 respectively) managed to get an LP release. The three releases in the Quiet Music series are from that same era. The recordings were made from 1983 to 1986, though it remains unclear whether they were originally released as they were recorded, or all three at once in 1986. Each of the cassettes was an hour long. Before the end of the 80s, Quiet Music 2 was released on LP in Brazil, though several of the tracks were truncated versions of the oroginals. Likewise, the Quiet Music CD issued by Fortuna in 1988 contained a complete version of QM2 with one (albeit truncated) track nicked from QM3. Similarly, in 1999 a 2CD Quiet Music set appeared on Fortuna with all of QM2 and QM3 but only one side of QM1. Projekt finally did it right in 2011 releasing the 3CD set, Quiet Music: The Original 3-Hour Collection, essentially just a reissue of the original master tapes, but the 3CD set under review is the 35th Anniversary Remaster, remastered by Spotted Peccary’s Howard Givens, and it has never sounded better. QM1 is one hour-long track “The Green Place, Parts 1 and 2,” the two parts being around thirty minutes each, built up from field recordings of a stream and birds, topped with synthesizers and flute, layers of hauntingly beautiful melodies that drift and recur regularly as the piece proceeds. It’s very different from QM2 and QM3 which both find Roach at the beginnings of the development of his floating ambient style, as there are no busy sequences on any of these, the pieces flow and ebb in a dreamy mix of melodic subtlety, some slow low volume sequences can be heard below the surface at some points in QM3’s final track “Sleep and Dreaming,” one might not even notice. By far, the two most engaging cuts in the enti re set come from QM2, the thirteen minute “A Few More Moments” and the sprawling 32-minute piece “Air and Light” that was the entirety of the second side of the original cassette. When one considers this was all recorded using early-to-mid 80s synth equipment (Oberheim, JX3P, DX7), this set sounds way better than it should. Introspective, immersive and powerful, Quiet Music never sounded better.