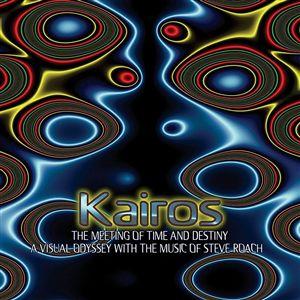 Subtitled The Meeting of Time and Destiny, this package includes a 74 minute CD and companion DVD that feature essentially the same audio program: eight tracks mixing floating ambient dreamlike sketches, more aggressive percussive driven trance pieces, and some with a more conventional sequenced electronic rhythmic understructure, all fused together into a lengthy continuum with few breaks. It’s basically a calling card featuring most of the different styles Roach has worked in over the years. Listening to the audio disc for several weeks before ever getting around to playing the DVD gave me the opportunity to personalize it into my own introspective concept. When listening to Roach I don’t typically envision imagery, but rather use it as a soundtrack to cast off worldly thought and wander down the subconscious spiral into the eventuality of slumber. As such it was a real eye-opener to finally experience the DVD, where a number of visual artists have each created flowing cinematic atmospheric art and (for lack of a better term) animated mathematical imagery for each one of the eight sections of Kairos, some recalling the sort of evolutionary liquid light shows of yesteryear, albeit in a computerized setting. My personal favorite is the first section “Soul’s Time,” which features some surreal cinematography by Steve Lazur. All of these visual interpretations of Roach’s music are very engaging, and nothing short of excellent; I found myself watching these for the better part of a day on endless repeat. While I still enjoy the privacy and introspection of the audio-only program, the collaborative DVD certainly offers another dimension that opens a new door of experience.