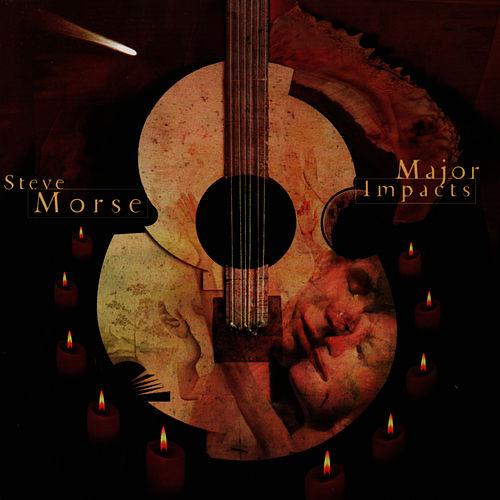 A unique theme to this release: Magna Carta gave Steve Morse carte blanche to come up with tunes based on styles derived from his choice of influential guitarists. Eleven tracks in all make the grade on Major Impacts — everything from tributes to Eric Clapton, The Allman Brothers, to Steve Howe, and more. The amazing thing about Morse's effort is that not only has he captured (and displayed a deep understanding of) the styles of his mentors so vividly, but that he actually fashions the ideas into instrumental pieces with catchy themes; and still comes out sounding like himself. To challenge Morse's abilities I tried to guess the intended player's style, without referring to the liner notes. The important point however is where the listener's tastes lie: I was never a fan of Mountain or The Byrds so those two stumped me, but of the lot I was familiar with I guessed all except one. His Clapton and Hendrix pieces were so spot on — even down to the tone of the instrument, and the style of rhythm playing. I wonder if he used different guitar / amp setups to achieve such a precise simulation! For me the most appealing were the Yes / Kansas tribute piece “Prognosis”; and “Truthola,” which combined Beck, Lifeson, and Eric Johnson influences into an outstanding multi-directional jam. Accompanying Morse this time around were Van Romaine on drums and Dave La Rue on bass. No keyboardist, but I think its presence would have helped to flesh out some of the ideas, especially on “Prognosis.” He does however include some acoustics, notably in a McLaughlin tribute, as well as a Page-inspired work in the mood of “Black Mountain Side.” The joy and enthusiasm that Morse brings to these works comes across forcefully, as he squeezes inspired ideas into every nook and cranny. “Major Impacts” stands as a tribute to great players, and a testament to the talents of a guy who belongs on the other end of a tribute himself. Herein lies a textbook of classic rock guitar playing.

Osada Vida - The Body Parts Party – Basing a concept album on the human body may be lazy, though happily the material and execution merit praise in this case. At first blush Osada Vida resemble other Polish progressive rock bands that...  (2009) » Read more