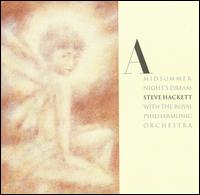 Here I am beset by another serious classical work by guitarist Steve Hackett on the new classical label, Angel (which also released Jon Anderson's Change We Must and Ian Anderson's Divinities). Written and performed on nylon string guitar by Steve with supportive accompaniment from the Royal Philharmonic Orchestra, the music is directly based on the written work of Shakespeare making this project even more highbrow and even (here's that dreaded adjective) pretentious! But all grandiose descriptions aside, this disc is chock-full of beauty, grace and elegance. String arrangements have been thoroughly worked to provide adequate support for the lead instrument without choking the songs to death (very common in work of this kind). Steve's emotive guitar phrases brush through several courses within the 18 songs. At times several of the pieces are very lush, with support from brother, John Hackett on flute. When compared to his other solo guitar works such as Bay of Kings, this release compares favorably, but there is no melody or chord change which distinctly rings in my head when trying to recall the passion inherent in this work. I'd say the disc is blurry but rigidly focused on themes of Puck, and gaiety in the fairy kingdom. The nonsense inherent in the great bard's oratory has been transcribed into a non-vocal interpretation without few signposts to relevant parts in the story. Also as part of the disc packaging is another distinctly exceptional artwork from Kim Poor graces the front of the disc. Play it when you invite your grandma over for tea if you still have one!