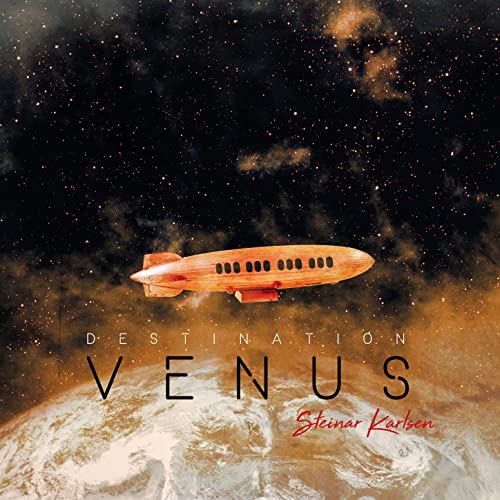 Stretch your musical mind back to the early to mid-60s, and chances are quite good you will find Steinar Karlsen – or someone that sounds a lot like him, there. Fact be told, Norwegian Karlsen’s recording career goes back to only the early 2000s when he joined the blues band Good Time Charlie from his previous band Hot Little Mama, eventually branching out into solo endeavors around 2010 while remaining with the band – which continues to this day. His solo works are based firmly in guitar instrumental excellence, finding a home somewhere between surf guitar, spaghetti western soundtracks, spy movie themes and more, with ideas developed well beyond the sources of his inspiration. And if the album title doesn’t provide a clue, there is a certain fascination with space travel, though his music doesn’t embrace that in typical ways. One might also find some of his bluesy roots on a couple of the tracks on this twellve song set, though again played out in a very non-typical melodic way. Karlsen composed all of the tracks here, a couple with his sidemen participating, as well as playing guitars, synth, pianette, organ, and Mellotron. Eirik Øien plays bass and Martin Langlie plays drums, with guest Bard Ingebrigtsen contributing rhythm guitar on the catchy number “Picnic on the Moon” and Marita Vårdal Igelkjøn contributing saw on the spooky “Monsters.” ”The Trip” invokes a bit of a jazzy rock style with a powerful, fluid, and memorable lead line, while “The Karman Line” launches with a bouncy bass figure that propels the piece forward as Karlsen’s tasty guitar licks take a jazzy and melodic flight onward into the short and shimmery “Weightless.” With its Western, somewhat bluesy feel, “The Goodbye” opens the album and sets the stage. “Venus” hits a slightly funky tone for that voyage to the second planet, while “A Billion Stars” which follows it takes a brooding look skyward, offering another opening to the space concept. Karlsen lends a powerful blend of captivating rhythms and a colorful melodies across the entire twelve song set, one that I can heartily recommend.