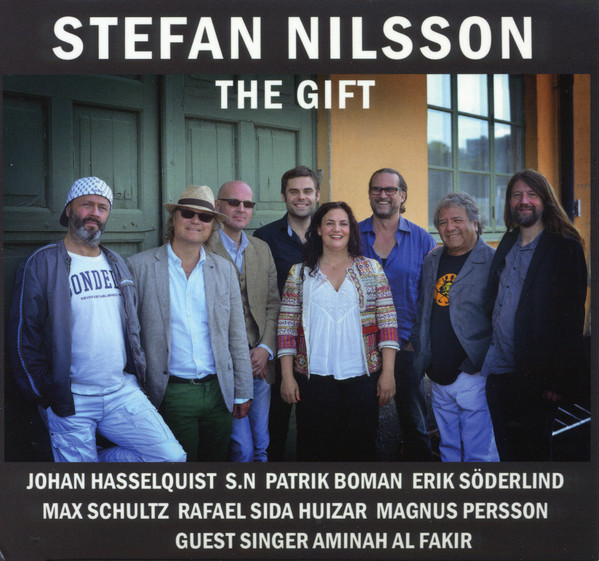 While this isn’t exactly a new release – it’s been out there since 2015 – it was sent to me as a promo at the end of last year, and had it not been I might be missing some great music by this outstanding Swedish keyboardist-composer and the fine ensemble he put together. If one doesn’t recognize his name immediately, especially those in the USA, that’s totally forgivable, with a dozen previous releases, some collaborations with other artists like guitarists Coste Apetrea and Jukka Tolonen, singer Tommy Körberg, and bassist Georg Riedel, among many many others, and many of those releases being soundtrack music. But older proggers should know Nilsson from his excellent prog jazz fusion band Kornet, which released three excellent albums in the last half of the 70s (unfortunately yet to make it to CD). The Gift is a collection of eleven instrumental pieces – consider the mostly wordless vocals of Amina Al Fakir on several tracks as another instrument in the mix, crossing jazz, fusion, progressive rock, blues, and even classical, for a stirring and energetic mix of styles that cross many boundaries. Guitarist Max Schultz appears on most of the album’s tracks, and Erik Söderlind plays on those where he doesn’t, while percussionists Magnus Persson and Rafael Sida play throughout, along with drummer Johan Hasselquist and bassist Patrik Boman. The bulk of the tracks are originals composed by Nilsson, but there are also a number of classical interpretations, traditionals, and some standard jazz pieces as well. In fact the album’s title track is actually a jazz-rock adaptation based on Bach’s “Concerto in D Minor,” with a great bluesy guitar solo to power it forward, and later in the set Nilsson offers a cover of “Winter” from Vivaldi’s Four Seasons with Al Fakir’s voice carrying the main melody. “Honeysuckle Rose” is his tribute to the great Fats Waller featuring a great vibraphone solo by Persson, which is immediately followed by Duke Ellington’s “Don’t Get Around Much Anymore,” but for the most part what we have here is a number of ripping jazz-rock fusion originals, brilliant from beginning to end.