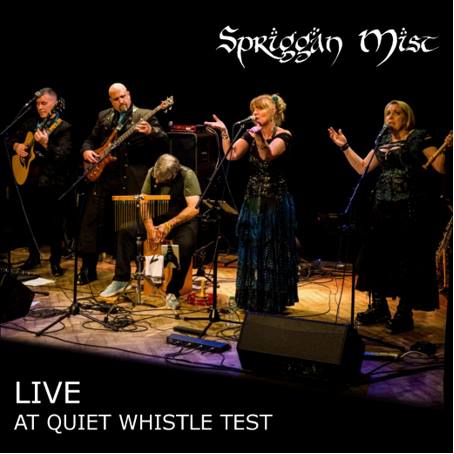 What, you may ask, is a spriggan? Well, a spriggan is a mischievous and thievish mythological creature from Cornish faerie lore. And Spriggan Mist is the British progressive folk rock band of Baz (bass, bouzouki, and vocals), Max (guitar, saxophone, clarinet, low D whistle, and recorders), Ann-Mari (vocals and keyboards), Colin (drums and percussion), Neil (guitar), and Sebastian the Spriggan. Their sixth album, Live at the Quiet Whistle Test, is a wonderful intimate performance that sounds like it was recorded in front of five or six of their closest friends. The tracks are beautifully mixed and they would have been better served not to include the polite clapping at the end of each song. Then they could have maintained the illusion of performing in front of a large crowd. The album opens with the instrumental “Swimming Sky Dragon,” a slow Celtic rock tune with a beautiful guitar melody. The opener is followed by “Brighid,” that features Ann-Mari’s delicate and breathy vocals and a lyric guitar solo. Next is “Widecombe Fair,” a beautiful British folk rock song with Baz on vocals. Then we encounter the “Arborfield Witch,” another folk rock song with Ann-Mari harmonizing with herself. This song is followed by “Handfasting Song,” a so-so song that reminded me a bit of Sally Oldfield. The band switched styles a bit with “Ballad of the Storm Moon,” a prog folk rock jig which I guess was the accompaniment for Sebastian the dancing Spriggan. Then we have the droning rock song “Dragon’s Fire.” And the performance ends with a pseudo sea chanty / party song “The Goodship Polyphemus.” If you crave pleasant British folk rock then you just might enjoy this live recording.