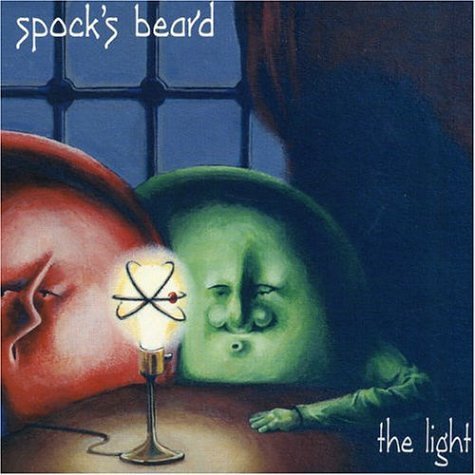 Spock's Beard is a new American group that even before the release of this album has been slated to play at Progfest '95. The band is a quartet led by keys/vocalist Neal Morse and also includes drummer Nick D'Virgilio who was Giraffe's "Phil Collins" at last year's fest. As the story goes, Spock's Beard were about to sign with Magna Carta, and although it didn't happen, it certainly gives you an idea of their sound. All of the musicians have worked with some well-known big label recording artists – Neal Morse with Al Stewart, D'Virgilio with Sheryl Crow and Kevin Gilbert, and bassist Dave Meros with Eric Burdon. Thus the axis revolves around a more accessible progressive styling, somewhat in the vein of Echolyn or Magellan yet with a bent towards the mid 70s symphonic progressives – Yes, Genesis, ELP, and Crimson. As with Echolyn, there is a combination of two stylings here – the first, a very complex symphonic rock with time and key changes to make the Änglagård fan drool; and the second, a Beatle-esque, 10cc, or Rundgren influenced art-pop that doesn't always seem to fit right with the other style. While there are four long tracks, there seems to be an even spread between these two leanings, a track can go from dramatic symphonic rock with impressive Hammond and choral Mellotrons to "I Am the Walrus" like vocal parts. While this will certainly go over well with more neo-progressive oriented fans, I found it maybe slightly distracting. The lyrics can be quite good as well, although the anthemic obscenities on the third track ("...Fuck You!" ending many of the vocal phrases) that maybe arguably work will certainly lose some potential listeners (or labels). Overall, this is still a hell of a debut with a lot of creativity and a good total sound. I think the more adventurous listeners may not be left fully satisfied due to the vocals (more the verse / chorus stylings than the actual tone) but most should find more than enough good music here.