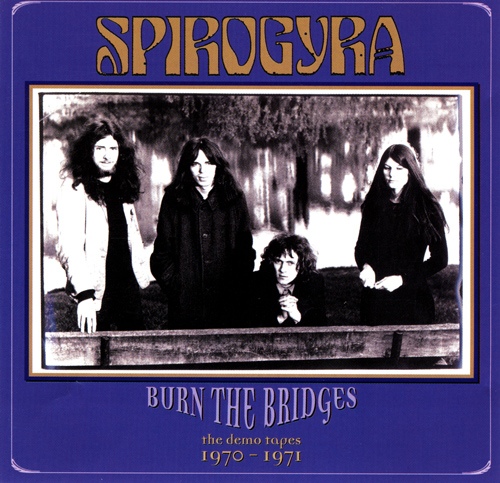 Not to be confused with a similarly-named 80s fusion act, this British band released three undisputed classics of progressive / psychedelic folk back in the 70s: St. Radigunds, Old Boot Wine, and Bells, Boots, and Shambles. Spirogyra had many songs in its repertoire, however, that never made it to vinyl. This CD makes those tunes available for the very first time. Taken from two demo sessions in 1970 and 1971, the 17 tracks on Burn the Bridges are as brilliant as anything the band later recorded. In fact, I’m in complete agreement with Spirogyra’s founder, Martin Cockerham, that this disk includes the band’s strongest material. The sound here is folksier than on the studio albums, but it is also more passionate and more expressive. Two songs feature solo performances by singer / guitarist Cockerham, a third includes drummer Dave Mattacks and two other studio musicians, but the remaining 14 numbers are performed by the quartet of Cockerham, vocalist Barbara Gaskin (of Northette fame), violinist / pianist Julian Cusack, and bassist Steve Borrill. Cockerham’s Dylanesque singing and Gaskin’s crystal-clear vocals offer a stirring contrast to each other from seven-minute disk opener “Turn Again Lane” onwards, while Cusack’s violin lines (which range from folk fiddling to more experimental stylings) and piano explorations provide an additional melodic voice to complement both singers. In spite of some tape hiss and print-through echoes, the sound quality here is excellent, considering the nature and age of the source tapes. For fans of Spirogyra and prog-folk more generally, Burn the Bridges is a treasure whose release from the vault was long overdue. Perhaps my favorite release of 2000.