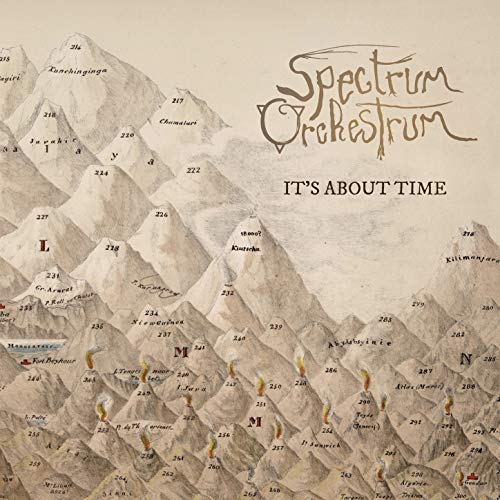 French five-piece Spectrum Orchestrum started back in 2007, and has been pretty much flying under the radar all this time. We were introduced to them with their last release Suburbs (from 2014) but there are four releases prior to that, beginning with Improvisarium in 2008. This newest release, It’s About Time, subtitled Improvisarium V, contains only three tracks, from the one-minute opener to the 33-minute title track, and then a ten-minute closer. And as you might have accurately guessed, this is all improvised, although this is all too tight to not have been rehearsed a dozen times or more before the recording session. The band features guitar, bass, drums and percussion, Fender Rhodes and organ, and last but not least, alto sax; there are voices as well, though not credited. That one minute opener “Three to One” as a minute of complete chaos and madness, every player making as much noise as they can for the duration; think of that ending coda to “21st Century Schizoid Man” and you will be almost there. Going forward, we have the main course, “About Time” in three parts, although one might have no idea where the parts begin and end because everything just morphs along as it goes with an intense groove, beginning with a drum cadence and throbbing bass, then a gentle keyboard atmospheric later joined by a conversation between guitar and sax, slowly building in intensity and power, ratcheting up at a steady pace, reminiscent of some mid-70s Magma sans vocals, just a little more gnarly and freaky. Around the eleven-minute mark a series of whistles go off and the groove descends into a mysterious corner, less hard-driving, with mettalic gongs and bells and odd percussion that may remind the listener of Indonesian gamelan, but in truly free-improv style, piquing the imagination. As we approach the 18-minute mark, the bass and electric piano groove begins to return to its previous strength, slowly but ever so surely, driving forward like a march into the abyss, with sax joined by wordless voices, snarly guitars, and general chaos, beginning a slow fade at around the 31-minute point, with the voices becoming more promonent. The closer, with its reassuring title “Not the End,” is a slower evolving piece without a uniform driving groove, pushing out in all directions until it all winds down around the ten minute mark. Fans of 70s Magma, Combat Astronomy, and similarly inclined power-improv units should definitely add this to their list.

Dom F. Scab - Analogical Confessions – Dom F. Scab is Spain’s answer for Tangerine Dream fans who wish they still sounded like they did in 1985 or 1986, right when they transitioned from Johannes Schmoelling to Paul Haslinger. His...  (2002) » Read more