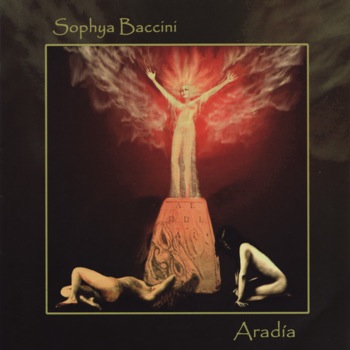 Hers was one of the most powerful voices in Italian rock when she fronted the band Presence in the mid-to-late 90s, with albums like The Sleeper Awakes and Black Opera to their credit. Apparently Presence is still a going concern, but Baccini has released this solo album, which takes a more classical approach, a bit darker and Gothic, and certainly highlights her compositional talents and vocal artistry in their best light, without the crunching guitars and heavy rock distracting. Some cuts like “Al Ritmo di una Storia” approach the pop idiom with delicate tastefulness, while others too many to enumerate adopt a darker melancholic tone, or a more introspective feel with piano accompaniment and some light orchestration. Vocalist Lino Vairetti provides an additional voice on “Non e l’Amore il Tuo Destino” for some stunning operatic harmony work. As far as instrumentation goes, Baccini covers the keyboard parts herself (piano, synths) with support musicians covering guitars, drums, percussion, modular Moog, violins, flute, woodwinds, and plenty of orchestral support. Of special note is the track “Two Witches and Doreen” where Baccini is joined by additional vocalists Nona Luna and Ana Torres. The album proper closes with a beautiful cover of Joni Mitchell’s “The Circle Game.” A bonus video track is also included. This is an album of exceptional merit, one that most definitely deserves to be heard.