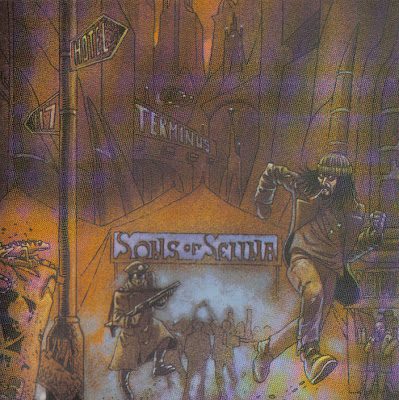 This EP is a bit of enigmatic release, coming with no band or lineup information at all. The disc contains three songs, totaling 23 minutes. The music on the first two tracks features a driving, grungy alternative-rock sound with a slight prog bent and a strong lead synth presence. Distorted vocals, grating noise and feedback mingle with heavy guitar riffs and a metalish rhythmic insistence, and these songs almost come across as the kind of eclectic new rock one is likely to find on a college radio station. The third track, however, is quite a bit different; a mellow and spacey Gong-like song with the Daevid Allen-like mantra "I'm so happy." The overall effect of the EP is perhaps akin to a heavier and contemporary variation on a band like Here & Now, with their mix of space prog and punk sensibility. It's not apparent from this short EP which, if either, element is more telling of the Sons of Selina's musical heart, but Terminus is probably intriguing enough to warrant checking out future releases from this band.