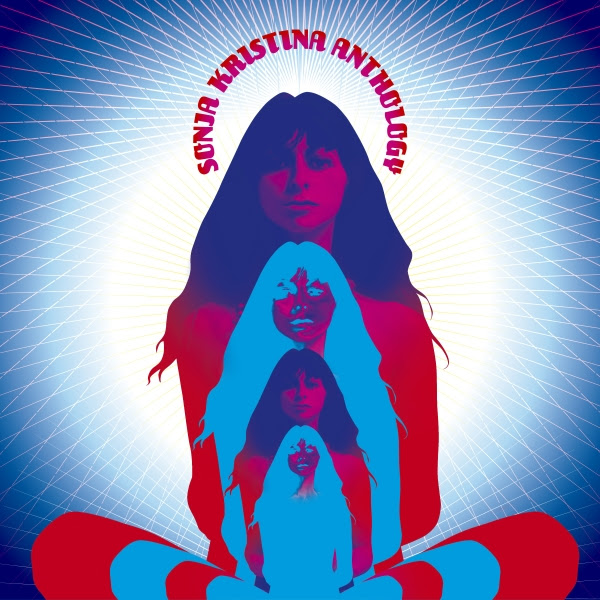 Most will know Sonja Kristina from her many years as the singer and de-facto bandleader of Curved Air, the British progressive rock band that broke many barriers in the early 70s and continues to this day. What many may not know is that, prior to her involvement in Curved Air, she was active in the late-sixties nascent British folk revival, having been performing with her guitar in folk clubs for a good five years prior, and had even performed with the early Strawbs for a short time. Sadly no recordings from this early period exist (or maybe they do, but nobody is letting them out). Sonja’s fortunes changed directions in 1968 when she auditioned for the London production of Hair, and subsequently landed the gig. After that production ran its course, she was invited to join a recently formed band called Sisyphus, which subsequently became Curved Air, and the rest is history. Curved Air released four albums on Warner Brothers and then split, and has regrouped off and on many times over the years. This long overdue Anthology focuses on Sonja’s music from the in-between times when Curved Air was not a going concern, mostly during the 80s and 90s, a period when she released numerous long-players, CDs and a handful of non-LP singles as well.

Disc one opens with a re-recorded version of “Frank Mills,” a song she performed and recorded when Hair first opened in London; this 2017 version is exclusive to this compilation. There is only one Curved Air song here, “Love Child” from the album of the same name, recorded by the Air Cut version of the band that went unreleased for decades. Her landmark 1991 release Songs from the Acid Folk is well represented, featuring nine of that album’s twelve original cuts, including “Rollercoaster,” “This Is Not a Sanctuary,” “Anna” and a revisited version of “Melinda (More or Less).” Four more cuts are drawn from her self-titled debut album from 1980, and a couple more from the 1994 album Cloud 10 / Harmonics of Love. Also featured are otherwise-difficult-to-find tracks like “The Passion” from Excalibur 4: The Dark Age of the Dragon, “I Don’t Believe a Word” from the Motörhead tribute Sheep in Wolves’ Clothing, the A-side of her 1985 single-only “O Fortuna,” and another 2017 exclusive track “Ces’t la Vie” as a tribute to the late Greg Lake. The booklet notes, written by Sonja herself, give first hand accounts and background on most of the selected cuts. This is an outstanding compilation, ready made for those who only know her work with Curved Air. Anthology opens a whole new world.