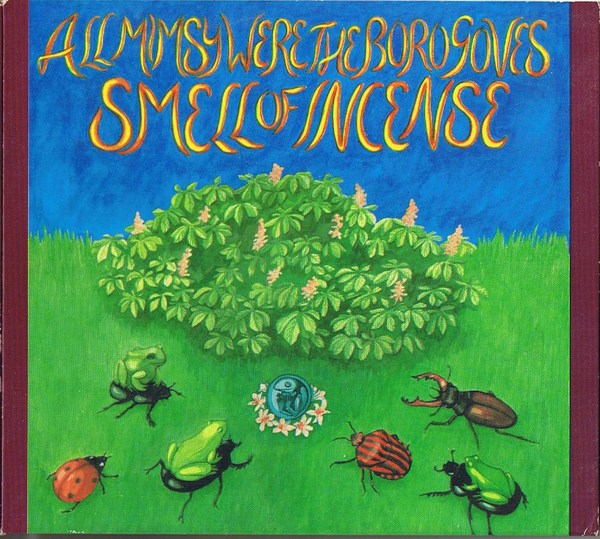 Normally you can’t tell a book by its cover or the quality of a recording by its cover art. However when I first cast an eye on the beautiful artwork of this gatefold CD and recognized the line from Jabberwocky I knew I was in for a treat! The Smell of Incense are a Norwegian band, formed about seven years ago, that churn out amazingly timeless psychedelic music. They intended this release to be a collection of cover songs by obscure psychedelic or acid punk bands from the late 60s and early 70s and it succeeds beyond your wildest dreams! The 20 second opening track is not listed on the CD but sounds like an excerpt from some Indian pop music. TSoI officially kick in with "Alice" (track 2), an appropriate paean to Lewis Carroll and garage bands. It reminds me of Pink Floyd’s "The Gnome" which after a magic carpet ride picks up the tempo with an otherworldly progressive guitar solo. Track 3 is "Faerie Emerald" a whimsical psychedelic folk rock song much in the style of Steeleye Span and early Renaissance. Their first official cover song is an incense smelling raga version of the Kinks’ "Fancy." What a wonderwall arrangement! I found myself locking into the groove and drifting with the music. I never realized how much I missed raga rock until I heard their version. The next song, "Christopher’s Journey," is another original TSoI song this time about Christopher Robin incorporating excerpts from Milne’s poetry. This song above the rest sounds remarkably like an obscure sixties band Wind in the Willows, the first band with Debbie Harry AKA Blondie. TSoI’s next song is an instrumental cover of Pink Floyd’s "Interstellar Overdrive." The opening bass riff sounds a bit stilted but that is soon forgotten as you travel the void with TSoI. Now the band stretches even further and explores the cosmic realms of space rock traveling to distant galaxies that Pink Floyd never dared approach! Then we come full circle back to that recognizable bass riff this time played as if TSoI were Pink Floyd. Now if that wasn’t enough for you, TSoI turn to the epitome of transcendental psychedelia, The Incredible String Band. Here they take Robin Williamson’s acoustic "Witch’s Hat" and transform it into folk rock replete with sitars and mandolins. The final song, "Shrine," is not truly a cover song in that it was written by Peter Hammil in 1968 and never recorded. The band views "Shrine" as a TSoI song with Peter Hammil lyrics and they wrote the music with a vague Van der Graaf Generator feel. Then to close out the CD they included what sounds to be a 40 second excerpt from Walt Disney’s Alice in Wonderland. What a truly wonderful release! TSoI have distilled the essence of psychedelia and bottled it for consumption. There is not one weak spot on this disk and it is certainly to rank as one of my Top Ten picks for 1994. Forget about the Ozrics and their psychedelic posings, buy this CD and experience psychedelic music at its finest. Like Hendrix said, “Have you ever been experienced? Well I have.”

If you want to wax nostalgic and hearken back to an era where a faction of psychedelic music was metamorphosing into progressive rock, you might want to check out Smell of Incense. This is not a re-issue; rather the group has an obsession with the mid- to late-1960s. They take from the breezy, West Coast rock sound of that bygone era which combines folk, rock, psychedelia (with some healthy doses of fuzz guitar), Eastern exoticism (vis a vis the use of tablas, sitars and similar indigenous instruments) and the nascent form of progressive rock. One can detect the influence of such divergent groups as the Jefferson Airplane, Moody Blues, Third Ear Band, Pink Floyd (they do a nice version of an old nugget, "Interstellar Overdrive"), and Pentangle, among many others. You can almost smell the patchouli oil wafting out of the speakers. As always, Colours does a magnificent job with their packaging. The three-fold digipak has colorful and appropriate art work with an insert/removable booklet with psychedelic pen and ink drawings and hand written lyrics.

Daevid Allen Trio - Live 1963 – The fruitful seeds of the Canterbury sound have always been traceable back to the Wilde Flowers. So what if a valid live document of beat poetry just happened to suddenly surface as part of Rob...  (2005) » Read more

Legendary Pink Dots - A Dream Is a Dream Is a Dream – This LPD DVD release is the earliest known live concert footage of the band, recorded live at De Vrije Vloer in Utrecht, Holland on January 21, 1987. At that time the LPDs were a six-piece band...  (2006) » Read more

Gift - Gift / Blue Apple – Gift is one of the second generation of German bands, which aims its sights on rock. Both albums released in the early 70s show the band's love of blistering guitar leads. "Drugs," one...  (1996) » Read more

Non Credo - Impropera – It won’t take more than about twenty seconds of the first track for the listener to know they are in for an unusual treat, one which the remainder of this 60-plus minute epic bears out. Touched...  (2007) » Read more