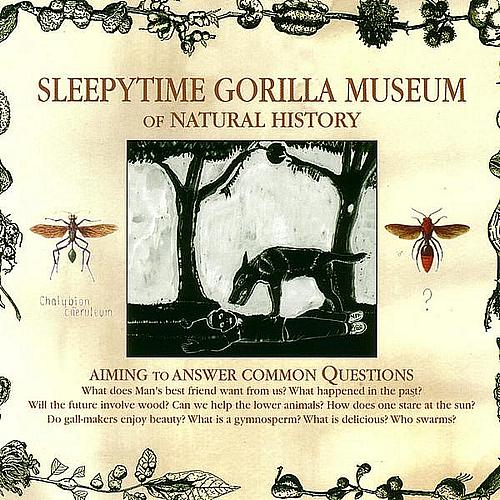 Sleepytime Gorilla Museum's entire character is represented well by the opening track "A Hymn to the Morning Star." The song opens ominously with a growling dog then transforms into an angelic choir waltz. This unnerving dichotomy is a great symbol of the band in general. SGM are the scary and the humorous and the ugly and the beautiful all at the same time. They'll sing you a lullaby then kick your teeth in — often within a single song. Of Natural History is a lesson in jarring rhythms, complex harmonies, intricate vocals, and raw power. "The Donkey-Headed Adversary of Humanity Opens the Discussion" exemplifies all these qualities. Its flute and violin unison angular melodies float over hard-driving, yet crisp, syncopated rhythms. Layered vocals and pizzicato strings then take over control of the song, before the frenzied introductory riff is reprised. The jacked up beats in "Bring Back the Apocalypse" are incredibly tight, given their complexity and speed. "The 17-Year Cicada" is mellower and features ambient sounds mixed with flutes and homemade metal devices being pounded. New drummer Matthias Bossi from Skeleton Key appears on a few tracks and fits in perfectly with the band — not surprising given how often SGM gigs. Several of the album's tracks have been in the live set for a while now and some even appeared on last year's SGM Live CD, so fans will find some of the material familiar. Excellent musicianship, a unique sound, and guaranteed to freak out your neighbors and their small children.