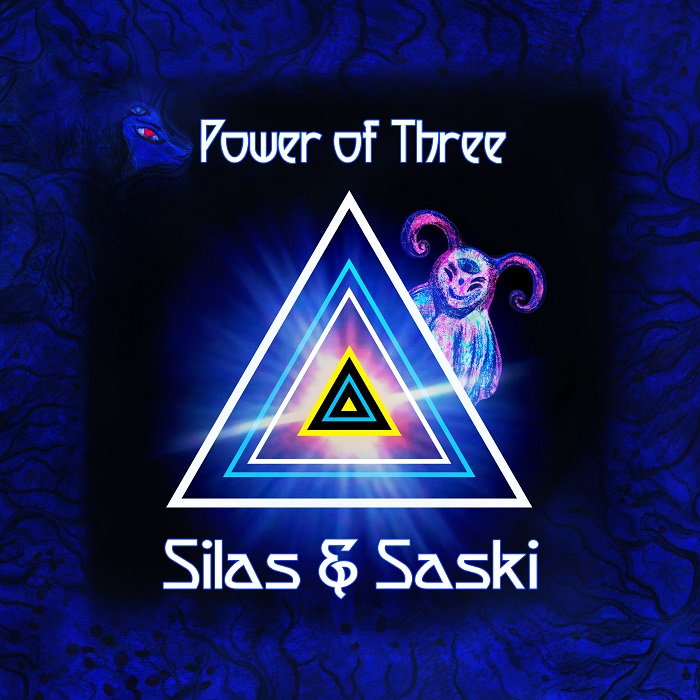 This three-song EP is the debut release from Silas & Saski, an important new group with a bright future in front of them. Saskia Maxwell is a singer, guitarist, and flute player with a powerful and haumtingly beautiful voice from a musical family and who grew out of a world of folk music; classically trained on guitar and flute, she has toured solo throughout the British Isles playing hundreds of shows. Silas Neptune is the son of Ozric Tentacles main man Ed Wynne, and has played synth on all of their releases since 2011’s Paper Monkeys, on Nodens Ictus’ Cosmic Key, as well as his own full length solo release The Scales of Tahuti. Here, he plays guitar and bass as well. A potential listener might expect this to be ‘son of Ozrics’ but it most certainly is not; although it’s informed by that sound to a certain degree, Power of Three bears an electrified folk sound imbued with some psychedelic trappings. A balance between vocals and instrumentation is established on the opener “Magic of Words,” where the vocals are mixed high within a sea of acoustic and electric guitars, bass, and swirling electronics, and just builds from there over its five minute duration, with guest player Paul Hankin contributing congas, and Tom Brooks providing EMI synth bubbles to all of the tracks. Moving forward to “In Reverse,” background voices and electronics blend freely as the opening builds, yet the lead vocals are right out front where they need to be. Ed Wynne blesses the track with a blistering guitar solo mid-way through its eight minute duration. The closing title track is a haunting swirl of voices and synth with a powerful guitar and flute solo cutting in around the three minute mark, here Maxwell’s voice is subjected to heavier than usual reverb, but the result is very effective. In all, this represents a great start, and it will be interesting to see where they take things on the forthcoming full-length album Entertaining Possibilities (which may or may not include any of the songs on this EP) but this is an outstanding debut.