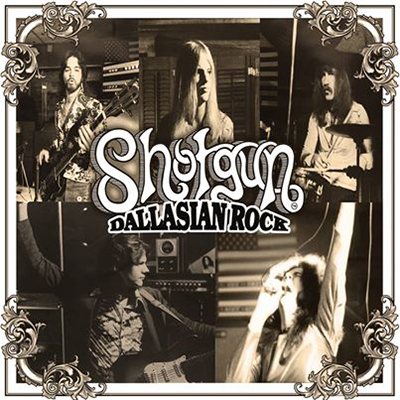 Back in the early to mid-1970s, before the dance, punk and new wave sounds completely overtook the music industry, there was plenty of room for straight-up rock and roll bands that presented a hard-edged no-frills combination of catchy tunes, boogie rhythms, and guitar flash fronted by unmistakable voices. Some, like Grand Funk, Bloodrock and JoJo Gunne were already well established, while others like Black Oak Arkansas and REO Speedwagon were up and coming. Every locale in the country had their own bands to match the national acts, and Dallas / Fort Worth was no exception: Shotgun were local stars, with an abundance of great material, a charismatic frontman in singer Billy Metcalf, and solid backing by drummer Guy Houston, bassist Hugh Coleman, keyboard player Russ Skarsten, and John Michael Soria on lead guitar. The band had a solid three year run from the beginning of ’74 until new-years ’77 when they played their final gig; some time prior to this in early ’76 the band recorded a full length eleven song LP Dallasian Rock that was never released, perhaps just a little too late for a new band brandishing this style of rock in the face of a changing musical scene. For whatever reasons, this fine album sat on the shelf for 38 years until re-discovered by Rich Patz of Shroomangel records, who has an uncanny ability to sniff out such archival gems. So here we have it finally, almost four decades after it was recorded, remastered and sounding better than ever, in glorious virgin vinyl, or CD – the latter featuring seven demo cuts from 1974, plus four bonus live tracks from ’76 that illustrate the amazing power this band wielded in their day.