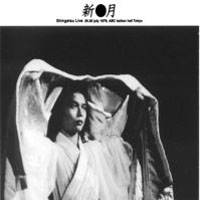 I haven’t heard Shingetsu’s studio album, so this concert recording is my introduction to their music, and it’s quite a surprise. And like many surprises, it has both good and bad aspects. The good is the music itself – this is very tasty stuff, firmly in the footsteps of the English masters of prog, especially Genesis, but with enough originality and personality to lift it above mere emulation. The bad is the recording quality – I’ve heard audience boots better than this. But through the distorted drum sounds and the overloaded bass, you can tell this band was really cooking. They have a lot going for them. Vocalist Makoto Kitayama has a strong, somewhat androgynous sound nothing like any other singer I can think of. Haruhito Tsuda is a very versatile guitarist, able to handle delicate passages as well as scream out a solo. Keyboards are quite prominent, with band member Akira Hanamoto joined by guest Takashi Kokubo for walls of organ, piano, Mellotron, and synthesizers. The rhythm section (Shizuo Suzuki on bass and Naoya Takahashi on drums) provide muscular backing for the tunes – no wimpy artsiness here. They even have a few surprises up their sleeves, like the aggressive rock tune “She Can’t Return Home,” with its driving beat, tricky unison breaks, and a middle section with a strange synthetic voice. There are also occasional flashes of Japanese flavor, further distinguishing Shingetsu from the English bands. From the tiny pictures included, this must have been quite a spectacular show.

[Note: This release is from the same concert as the Belle Antique CD Akai Me No Kagami, with bonus tracks added.]