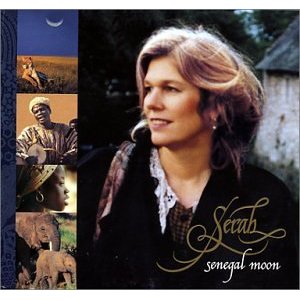 Serah is an American born composer and singer who has lived in both Africa and France. Her material straddles the boundaries of new-age, world music, and pop, and this is her fourth release. The eleven pieces herein carry a strong African flavor, but also a strong sense of euro-folk-classicism. Her voice is excellent, but a little frail and unrefined at times – which in a way gives the disc a nice touch, but it's also a nice contrast with vocalist Grace Storm, who provides the more soothing and ethereal backing vocal passages, while the Mauritanian born vocalists Daby and Omar Tour‚ and Senegalese vocalist Guilla Thiam provide the more rhythmic African based vocal stylings which to some degree are an integral component of almost every piece on the disc. No expense was spared in the production, and the strong contingent of backing musicians should be ample evidence thereof: bass god Bernard Paganotti (Magma, Weidorje, Paga, Manu Katch‚) and his trademark style can be heard on every tune; also in the lineup is Paga keyboardist Bertrand LaJudie. Paganotti's son Antoine (who has worked with Patrick Gauthier and others in the past) capably mans the drum kit, and his daughter Himiko offers backing vocals, while guitarist Patrice Tison and percussionist Xavier Desandre round out the lineup. The packaging is all-out as well, a cardboard tri-fold five color with die cut sleeve and gold printing. While the instrumental component and vocalizing are quite strong, too often the material wanders too close to new-age pop territory. Obviously this was conceived as a mainstream project, but it just happens to be interesting and somewhat progressive due to the African music content and the outstanding players/arrangers that back her.