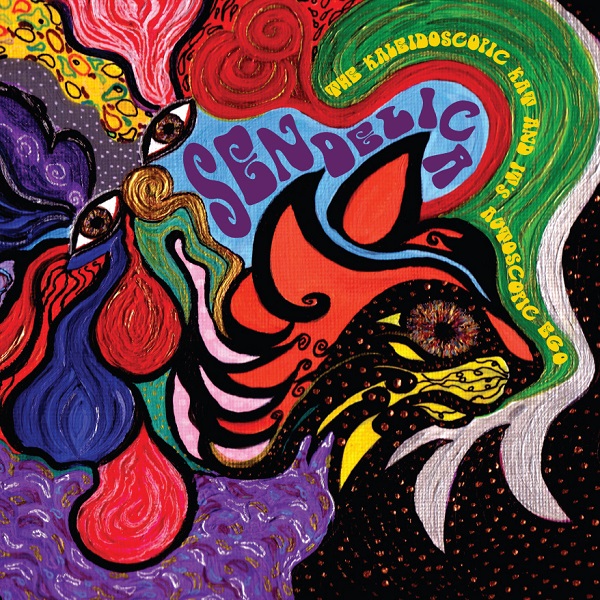 Those of you familiar with Fruits de Mer will recognize Sendelica, as they have appeared on numerous FdM vinyl releases over the past two to three years. On FdM this Welsh band has released both vocal and instrumental tracks, but their latest release, The Kaleidoscopic Kat and It's Autoscopic Ego [sic], contains nine instrumentals mixing elements of Krautrock, Brian Eno, Pink Floyd, and some of the best contemporary blissed out psychedelic music around today. The CD opens and closes with, “The Kaleidoscopic Kat,” an eerie and mournful ambient track that would have been right at home on Twin Peaks. Some of the song titles sound like they could be Acid Mothers songs: “Something in a Grain of Sand,” “Set the Controls for the Heart of the Buddha,” “Clever Meat,” “21st Century Autoscopic Ego Man,” and “It’s the Neu!! Kosmiche Disko.” But instead of the wall of sound sonic barrage on your senses from Japan, there are excellent psych and Krautrock jams with a motorik beat. There is even some very tasteful and trippy sax thrown in from time to time. Sendelica is Pete Bingham (guitars), Colin Consterdine (synths and keyboards), Glenda Pescado (bass), Jim Barber (bass), and Lee Relfe (sax). They are joined by a number of guests including one Nik Turner playing flute on the closing track “The Kaleidscopic Kat (Reprise).” All nine tracks are excellent and showcase a range of styles, though there is an obvious Pink Floyd underbelly on “Set the Controls for the Heart of the Buddha.” I highly recommend this release to Krautrock fans, especially if you love Neu!, Harmonia, Michael Rother, and Klaus Dinger.

Stickman - Fretless – On Neil Haverstick's ninth CD, he offers a compilation of all the fretless pieces from his previous CDs. Four of seven tracks exceed the ten-minute mark and feel improvised, sometimes enhanced with...  (2011) » Read more