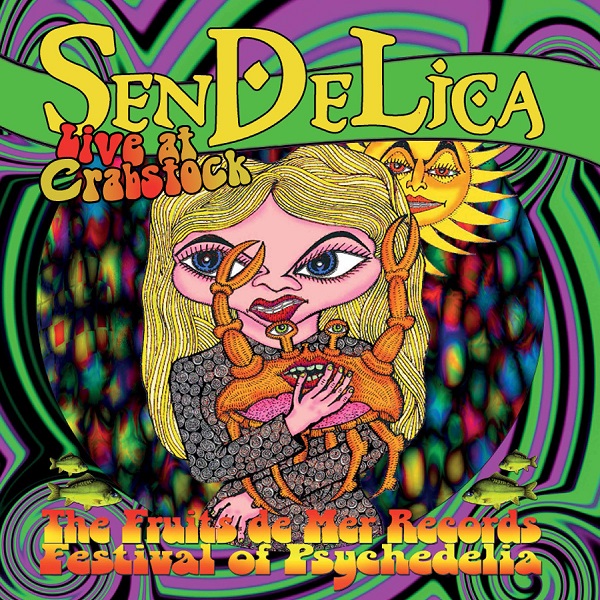 The success of the Fruits de Mer (FdM) All Dayer concert in August 2013 spawned several Crabstock festivals in different countries last spring. Sendelica, a long time FdM band, organized and headlined the festival in Wales on April 26, 2014. Because there is only so much that one person can do with a DIY label like FdM, Keith Jones came up with the spin-off label, Friends of the Fish, so FdM bands can release their own albums; the first release is Sendelica’s blistering Crabstock performance. There is just over an hour of pure space rock ecstasy that is an amalgamation of Hawkwind, Neu!, Klaus Dinger, and Amon Düül, with a bit of Pink Floyd thrown into the mix. The disc opens with 2 and a half minutes of pure and uncut Hawkwind jamming on “Standing on the Edge.” That is closely followed by 16 minutes of blissful space rock and a wild sax freakout on “Manhole of the Universe.” They slow things down a bit on “Set the Controls for the Heart of the Buddha” from their recent album. This slow and meditative drone-based tune builds on the eastern-themed saxophone lines to incorporate Pink Floyd’s signature riff that really rocks the house! Then, not skipping a beat, they launch into “Motorik Jam,” and need I say more? This is one very cool homage to Klaus Dinger and Neu! “Screaming and Streaming into the Starlit Nite” is another slowly building saxophone-based tune that explodes with scorching electric guitar solos. And just so they didn’t ignore FdM entirely, they performed for the first time live a superb rendition of George Clinton’s “Maggot Brain” from their 2010 FdM single. The melancholic and wailing guitar is dazzling in its brilliance! They closed their performance with “Spaceman Bubblegum,” with its searing electronics and electric guitars guaranteed to fry your brains. If you haven’t experienced Sendelica before, Live at Crabstock captures the essence of the band and is an excellent place to start.