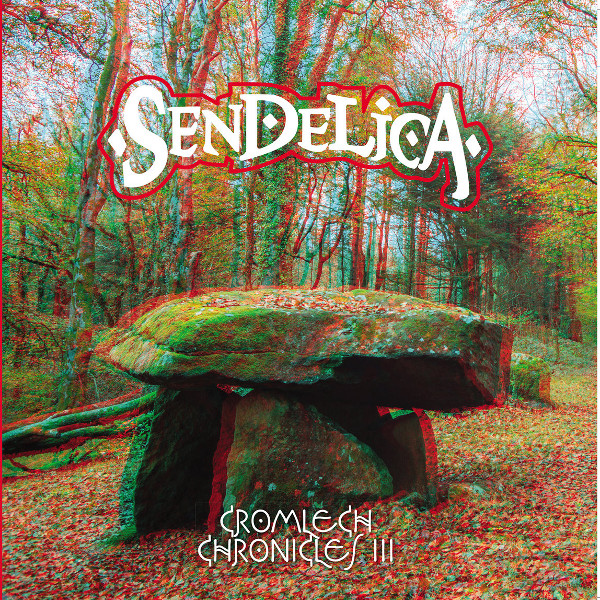 It seems like it was only yesterday that I reviewed Cromlech Chronicles II and now Fruits de Mer has released Cromlech Chronicles III on July 30, a set of three ten-inch discs on colored vinyl. For the past couple of years Sendelica has been gathering annually each August to simply play, improvise, and record wherever their collective muse takes them. August 2017 saw them swell their ranks to a six-piece band by adding Gregory Curvey from The Luck of Eden Hall as a second drummer and Roger Morgan on keyboards. The intervening twelve months between jam sessions does make a difference. The August 2016 sessions Sendelica released as Cromlech Chronicles II were floating, drifting music. The new line up takes the band in a different direction with six new instrumentals, one track per side, a mixture of searing psych rock and hypnotic pastoral tracks. There is a strong 70s vibe to the music running throughout the discs. And interestingly, the bucolic “Teifi Marshes” begins with woodland birds with the music slowly emerging as a twist on Pink Floyd’s classic “Grantchester Meadows.” Lee Relfe's cosmic echoed sax adds texture and then the band goes way beyond Pink Floyd territory. “Star Flower Blossom” is a particularly heady hallucinogenic jam that builds to a wonderful climax. And to complete the package is the eye-boggling cover art that requires 3D glasses to truly appreciate. Otherwise it looks like your mind is gone. Overall, quite a nice new set of instrumentals.

Änglagård - Epilog – First off, I think change is good, so long as the change is in a positive direction. The world of music is a chaotic, complex entity, and to stay in the same place for too long is more than just a...  (1995) » Read more