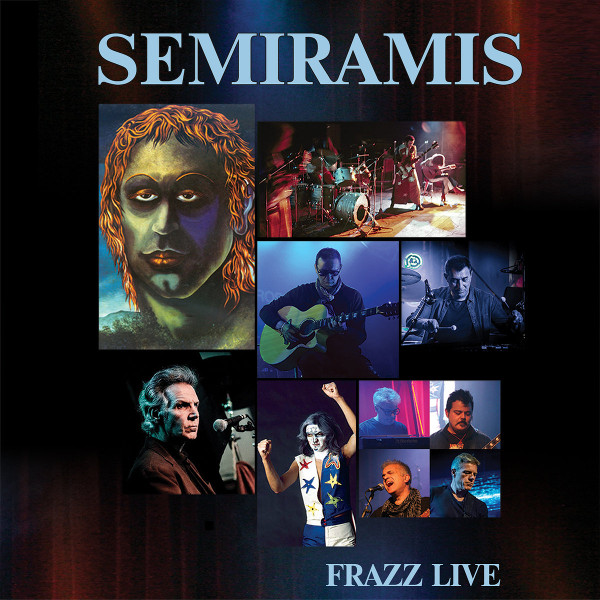 In 1973, a one-and-done group of Italians in their mid-teens formed Semiramis and released Dedicato a Frazz, an amazingly complex and beautiful progressive album classic that no serious fan’s collection is complete without. The band centered around the nucleus of Maurizio Zarrillo (keyboards), and cousins Marcello Reddavide (bass) and Memmo Pulvano (drums). Pulvano had to leave the group because he was the only one with a full-time job, so they replaced him with Paolo Faenza. Semiramis had an intense string of live dates after the album release, but they broke up in 1974. Only their vocalist Michele Zarrillo, Maurizio’s younger brother, stayed active in music. Forty years later in 2013, narrator and acoustic guitarist Giampiero Artegiani and drummer Paolo Faenza announced a Semiramis reunion with original member Maurizio Zarrillo plus Vito Ardito (vocals), Rino Amato (keyboards and synths), Antonio Trapani (guitars), and Ivo MIleto (bass). Frazz Live, recorded live in Genova on April 22, 2017, is the last concert with Maurizio as he sadly passed away two months after the show. This live show on both CD and DVD documents Semiramis’ performance of their entire album Dedicato a Frazz, with additional Italian narrations by Giampiero introducing each track. Unfortunately, since I do not speak Italian, these narrations are lost on me. They also included two newer songs, one live and one in the studio, “Morire per Guarire” and “Mille Universi.” The performance is superb, showcasing Semiramis’ ageless symphonic / romantic Italian progressive rock. Ardito’s strong tenor breathes freshness into the music, with these aging musicians expertly navigating the intricate tempo and time signature changes, plus some guitar shredding. Back in the day, Semiramis were unique. But now, especially on the two new tracks, I detect some similarities to Lino Vairetti and Osanna. The CD by itself is a great way to experience the concert. The DVD provides the visual equivalent of being present, seeing raised cell phones recording the performance, but lacking the final track “Mille Universi.” Extra features include interviews with Diego Banchero (Il Segno del Comando); Gino Terribile, Giuseppe Terribile, and Franco Piccolini (Il Cerchio d’Oro), Mauro La Luce, Alberto Sgarlato (Flower Flesh), Giampero Artegiani, and Semiramis, unfortunately all in Italian without English subtitles. Putting that aside, Black Widow has done an otherwise outstanding job capturing and presenting this live performance.

Do You Believe in Axiom?