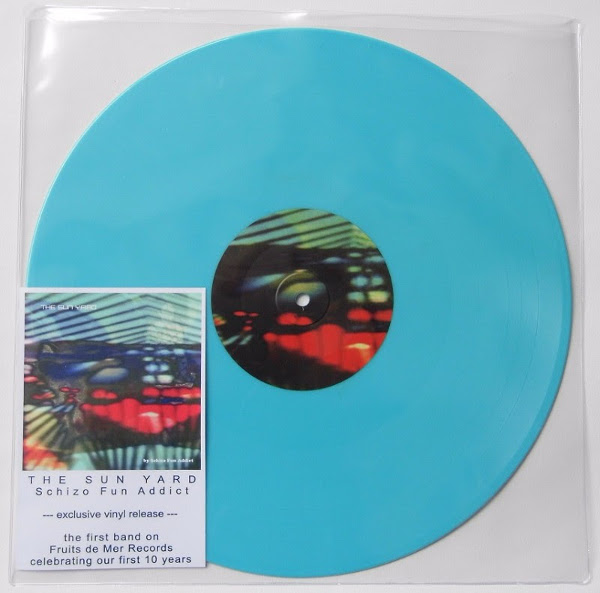 US band Schizo Fun Addict first appeared on vinyl on Bracken Records in 2007, Andy Bracken’s indie label that was the precursor to Fruits de Mer Records. Schizo Fun Addict was also the first band to appear on Fruits de Mer in 2008 with their covers of the infamous “Theme One” and “Ogden’s Nut Gone Flake.” It is amazing that Fruits de Mer turns 10 years old this year and that I interviewed Andy Bracken about FdM 7 years ago! Especially with the preponderance of today's digital downloads. But FdM continues to flourish and gain recognition. To celebrate this milestone, Schizo Fun Addict has generously created what FdM calls the Mother of All Free Releases, a limited edition vinyl LP (300 turquoise and 150 red copies) of their 2013 release The Sun Yard, originally only available on Souncloud. Members of the FdM Club received a turquoise vinyl copy as their annual club freebie. And those attending FdM’s 10th birthday bash in Glastonbury in May will receive a red vinyl copy of the LP. The Sun Yard contains the eleven songs from the original release, plus their new experimental electronic track “Strange Storm.” Included on the album are two songs from their Bracken Records 7-inch records “Dream of the Portugal Keeper,” which I think may be about soccer, and a rerecording of “Jericho Son Down.” The Sun Yard contains a couple of psych rockers (“Awesome Lovin’” and “St. Andrews”) a couple of psych-folk ballads (“Blizzard of 77” and “Her Famous Wish”), some pseudo-punk songs (“Pterodactyl” and “Forest Path Bandshell Renegades”), some hard rockers (“Who Will Be Gold” and “The Gaze Point”), experimental tracks (“Strange Storm” and “Reverse the One Me”), and the two early songs that included trumpets (“Dream of the Portugal Keeper” and “Jericho Son Down”). The Sun Yard is a strong album from the first cut to the last and worthy of a much larger audience. If you are not an FdM club member or unable to be in Glastonbury for the May birthday bash, be sure to visit their Soundcloud site to experience the genius of Schizo Fun Addict.