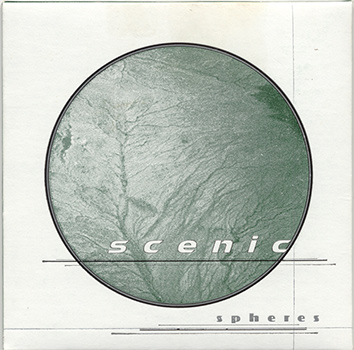 I haven’t heard Scenic’s previous releases, but from the descriptions I found on the net (“Ennio Morricone meets modern chamber music and Middle Eastern influences”), this CD EP is atypical. Be that as it may – bands are allowed to change, after all – it’s still pretty enjoyable. Of the three tracks, only one, “The Spheres,” is even close to what might be expected. It is a dreamy space rock groove slowly developing with washes of keyboard and echoey slide guitar. Guitarist Bruce Licher (ex-Savage Republic) provides a credible solo (technical flash would be out of place here) toward the end of the eight minute instrumental, and Mark Mastopietro gets in some slide guitar, but it is the keyboards of Robert Loveless that dominate, with a shimmery string sound like a dozen Mellotrons all at once. The other two tracks consist pretty much of only sustained chords on keyboards and lots of effects, with subtle melodies that may or may not be guitar. I suspect these tracks will not be on the forthcoming album, and as bonus tracks, they suffice: pleasant enough, but not much to sink your teeth into. The three inch disc will no doubt interest collectors for its rarity regardless of the music.