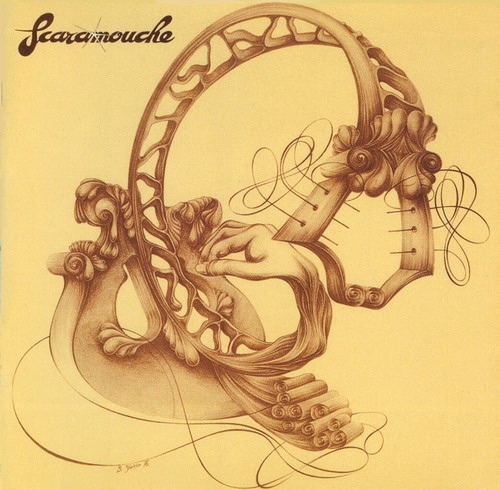 Here is another one of those total obscurities that Musea has a knack for unearthing, others in recent memory being Flyte, Ivory, and Tibet — one-shots that came and went before most ever knew they existed. This German five-piece existed from the late seventies, recorded this — their only album in 1981, and then promptly broke up after sales didn't measure up to expectations. It's an all too familiar story. Scaramouche's sound is a more commercial sounding progressive, owing influence to Floyd, Genesis, definitely Grobschnitt, but also blending pop, blues and funk into the mix as well. In the end, much of what they do ends up reminding of Machiavel in their early period, but without the reliance on Mellotron and the heavy symphonics, and a greater allegiance to pop structures. Lead vocalist Holger Funk is mixed a little low most of the time, but his style is roughly comparable to a Jon Anderson with just a bit more fortitude. Whatever vocal shortcomings exist, they are more than made up for with some excellent multi-tracked harmonies. Lyrics are in English, which Funk handles respectably. The rest of the band plays solid and tight, balancing skillful progressive tendencies with bluesy-rock sensibility, especially on tracks like "Find Me," "A Cloud in the Sky," and obligatory ten-minute magnum opus "Isn't It Real," although the album's best track, "Only Tail the Bait," may in fact be the least typically progressive of the lot. Initially I wasn't that excited about this album, but after a few listens certain parts began to grow on me, then others, it was a slow process being completely won over by it. Others may take to it more readily. I'd recommend it anyone into the style of bands like Machiavel and Grobschnitt, who don't mind their prog mixed with some tasty mainstream influences.

Both Flamin' and Groovy