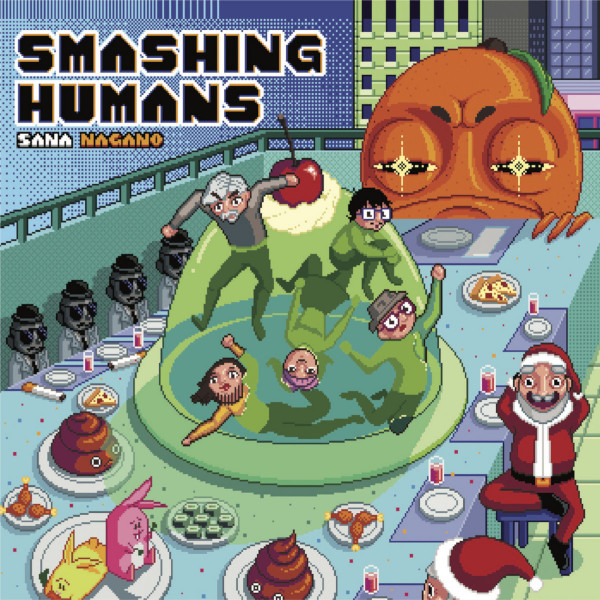 I first noticed violinist Sana Nagano in the Harvey Valdes Trio, and really enjoyed her playing. Since then, she’s shown up in a couple of Adam Rudolph projects, but it’s thanks to online friend Nicolas Meier that I came across her solo album Smashing Humans. This is one of those cases where an artist records an album with a group of other players, then names the group after the album, so the group Smashing Humans features Peter Apfelbaum (tenor sax), Keisuke Matsumo (guitar), Ken Filiano (bass), and Joe Hertenstein (drums) — none of whom I’m familiar with. The music occupies that wonderful (for me, at least) area where avant jazz meets RIO and experimental chamber music, with compositions that take unexpected turns and are full of jarring rhythms and harmonies. There is nothing simple here, though the focus is not on technical prowess and precision. This music is all about the interaction between the players, and their parts frequently seem at odds with one another, more experimental polyphony than conventional harmony. Improvisation is woven into the pieces as well, and my mental picture of how it works is that Nagano wrote precise pieces, the band learned them to the point where they became second nature, then all were allowed to interpret the written parts as they see fit within the framework constructed. That may or may not be the reality, but I think it gives the feeling of how it all works. Nagano’s playing is outstanding, nimble and crazed at the same time, and she makes sparing use of effects, opting for a more natural tone than (for example) classic Jean-Luc Ponty recordings. Apfelbaum likewise sticks to the natural sounds of his instrument, and isn’t particularly prone to squawking and other non-melodic sounds, though he does use them judiciously. Filiano plays acoustic bass, both plucked and bowed, and does make occasional use of echo and other effects. Matsumo is pretty wild on the guitar, more on the experimental than the conventional shredder side, full of dissonance and distortion. Hertenstein is not the kind of drummer who plays patterns — he’s much more part of the counterpoint, accenting notes from the other parts rather than just laying down a groove. That being said, there is a kind of groove to this music, albeit a somewhat disjointed one. I have a broad definition of what constitutes jazz, and have no problem putting Smashing Humans in that tent, which certainly makes it an early contender for one of my favorite jazz albums of the year.