Sam Arnold and the Secret Keepers — Listen to Your Mind
(Bandcamp no#, 2017, DL) 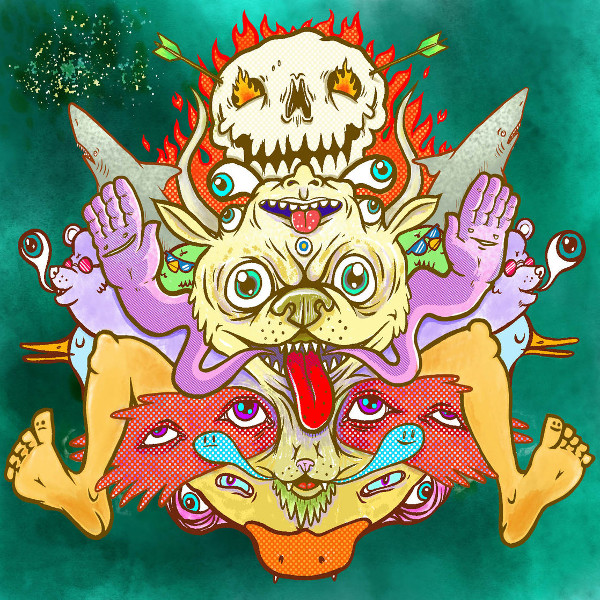 The cover art is a nightmare vision of an insane god’s melding of various creatures into a single entity. I’m not exactly sure how this relates to the music, but Austin’s budding art and progressive rock community is small, the bands all know one another, mixing and matching talents to form new musical collectives. In this case, Sam Arnold from Opposite Day has a side project called Sam Arnold and The Secret Keepers assembling Andy Nolte on keyboards and backing vocals (Super Creeps, Zissou, and Mostly Dead), Leila Henley on woodwinds and vocals (Invincible Czars, Poon, Stop Motion Orchestra), Greg Yancey on bass and baritone guitar (Opposite Day), Dave Irish on drums and percussion (The Baffles), and Mohadev on electric guitar (Stop Motion Orchestra and Obnositicon) into a coherent unit. The music is complex, yet deceptively simple to hear, integrating Americana, Mid-Eastern themes, funk, jazz, Afro-pop, progressive rock, and a tab of psych. Leila’s outstanding woodwinds effortlessly intertwine with Sam’s and Mohadev’s guitar solos and Dave’s intricate drumming. Despite their surface simplicity, these twelve tracks are intelligently composed, orchestrated, and rehearsed, so much so that the entire band sounds relaxed. The entire album is great, with the tracks “The Captain Is Dead” and its 60s gothic western vibe and ethereal wordless vocals, and the pop-psych “Creatures Are Sleeping” really grabbing my attention. We at Exposé are doing our best to let the rest of the world know about the excellent music coming out of Austin, TX. Sam Arnold and The Secret Keepers, along with their other respective musical projects deserve a broader audience and recognition!