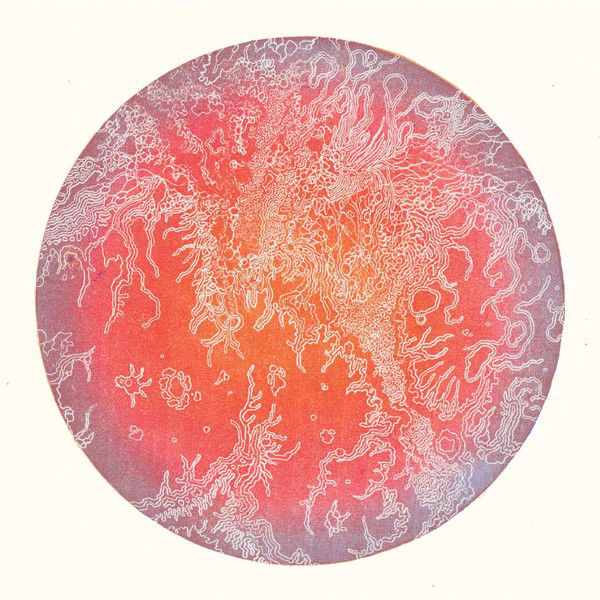 My previous encounters with the playing of saxophonist Ryoko Ono involved her work with Acid Mothers Temple — she appears on Have You Seen the Other Side of the Sky? and Crystal Rainbow Pyramid under the Stars as well as some live recordings — but it is her work in Sax Ruins that seems most relevant here. Sax Ruins is her duo group with wildman drummer Tatsuya Yoshida, and while that collaboration involves composed music, Wood Moon is entirely improvised and involves Dutch drummer Rogier Smal. In spite of the limited instrumentation, there’s a great variety of sounds and moods to be heard, from contemplative sparseness to frenetic hyperactivity, with both musicians stretching the boundaries of what their instruments can do. The nine tracks ebb and flow like conversations, though of course most of the time both participants are talking instead of taking turns. Ono exhibits mastery of the saxophone, sometimes fluid and lyrical (though never smarmy), sometimes frantic and growly. Her use of squawks and squeals is not abrasive, but supremely expressive, and even melodic. Special mention should be made of “Wood Moon 9,” where it sounds like she is blowing through her mouthpiece into a bowl of water, with gurgling noises and screeches. In addition to her sax, Ono also uses her voice, providing semi-spoken semi-ranting on “Wood Moon 4” punctuated by phrases from her saxophone. For his part, Smal uses his kit in a wide variety of ways, none of which involve keeping tempo with repeating patterns. At times the tempo is free, and he provides waves of sounds from cymbals, drums, rims, and hand percussion; at other times a pulse develops, and the hits keep time steadily, though without developing conventional accents. The prospect of an improvising duo such as this was at first daunting, but from the first listen I found it consistently engaging and enjoyable in ways that much improvisation is not. Ryoko Ono is an extraordinary saxophonist who bridges precision and freedom with impeccable taste, and Rogier Smal is a sensitive and imaginative drummer. Together they have created one of the most appealing recordings of free improvisation I’ve heard in quite some time.