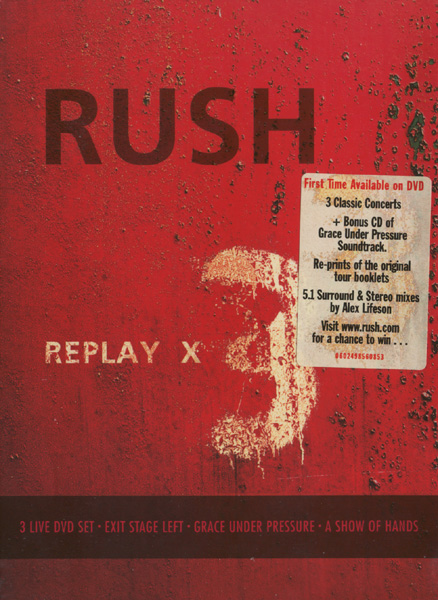 Rush fans have been salivating for these early concert videos to see the light of day in DVD format for ages, so to have all three in one collection is manna from heaven. Other than a few promos, the Canadian trio had never committed a live performance to film or video before 1981’s Exit... Stage Left and for many this was their first exposure to the band, thanks to frequent airings on MTV and other nascent music video outlets (remember Night Flight?) How many fledgling rock musicians cut their teeth on this music is hard to know, though this period is often regarded as Rush’s finest hour and they’ve never been so jaw-droppingly studly before or since. There’s Alex Lifeson the goofball guitarist, reeling off riffs and licks with a happy-go-lucky air. Geddy Lee, the master rock bassist with that killer Rickenbacker tone second only to Chris Squire (and in some respects superior). And of course Neil Peart, one of the few lead drummers in rock music—and one of the most influential. Originally shot to film, the digital transfer has been lovingly handled, though nothing can overcome some occasionally gloomy lighting. Sonically, equal care has been devoted to ESL, which has been remastered for 5.1 surround (with standard stereo the default setting, as is the case with all three DVDs). Three years and two albums later found the band sounding more like The Police and looking more like Duran Duran, though there’s no denying that Grace Under Pressure, as a piece of concert filmmaking, was superior to ESL. Fortunately, the material on the newer albums has aged well, a good thing since a bonus fourth disk in this package is the entire soundtrack from this DVD (perhaps Rush wants to fill the void since a live album had never been released at the time). Despite shoulder padded jackets and occasions where Geddy seems to be singing toward the fire escape due to the awkward positioning of the vastly enlarged synth rig, this is another film which leaves the viewer with nothing but admiration for the group’s abilities on stage. Rounding out the video set is 1988’s A Show of Hands, shot on the Hold Your Fire tour. This is the weakest of the DVDs in terms of material and the band was still wrestling with the same visual issues as P/G (nice singing to the fire escape during “Tom Sawyer,” Geddy). That said, the band — if this is any indication — gave audiences their money’s worth on this tour, and as a live music documentary there’s no faulting this release. The legions of Rush fans around the globe need little incentive to add this to their collections, though the inclusion of reproductions of tour programs from all three concerts is a very nice extra touch. Perhaps a telling sign of their lasting admiration is that, so many years later, Rush are doing such a quality job of presenting their old concert films to the consumer.