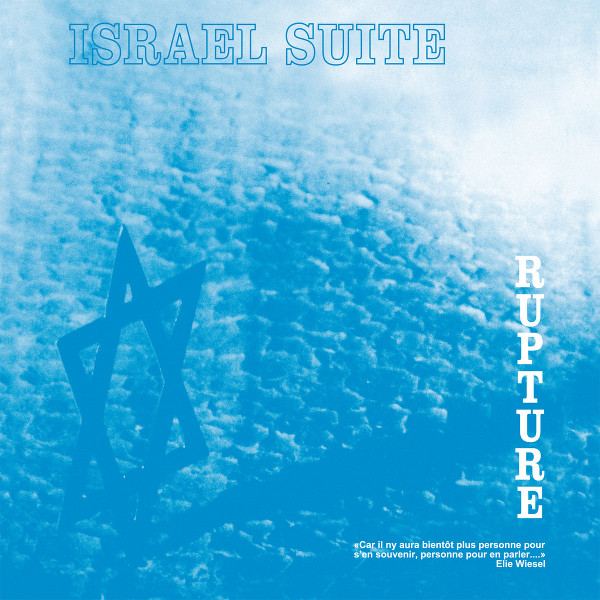 Rupture was a one-off French musical project from 1973 that was formed by French songwriter Boris Bergman (France Gall, Dalida, etc.) and drummer / vocalist Sylvain Krief (Airto Fogo, Michel Fugain, Aznavour, Clark Terry, Bud Powell, etc.) to record a concept album about the history of Israel. To perform the spiritual jazz / jazz fusion music they recruited bassist Jean-François Jenny-Clark (Don Cherry, Steve Lacy, etc.), guitarist Georges Locatelli (Total Issue), and keyboardist Jean-Pierre Mas, a virtual supergroup of Euro Jazz / prog musicians. The album was recorded over a period of three months and privately released with an extremely limited run, and has therefore become nearly impossible to find, despite being reissued several times over the years in very small runs. On May 11, 2017 Guerssen made this album available to a wider audience via its imprint label Sommor. The nearly 19 minute “Israel Suite” takes up the first side of the LP with five shorter jazz-pop songs on side two. “Israel Suite” starts from an ambient intro that slowly grows in volume and takes you on a musical journey that constantly shifts from jazz to rock to the abstract to progressive fusion. There is a little of something for most musical tastes here. Each musician was given plenty of space to stretch and delight the listener. In addition, there are spoken word snippets popping in and out as well as wordless female singing (la-la-la-la) that is replaced by a pleasant male vocalist singing in French. The shorter songs on side two showcase Mas’ rapid keyboard chops, Jenny-Clark’s inventive bass riffing, and Krief’s understated drumming. If you have been searching for this French rarity, now is the perfect opportunity to grab a copy at a reasonable price.