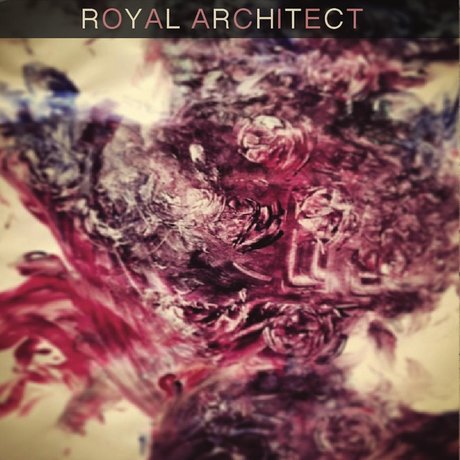 Royal Architect is a Baltimore based four-piece that, following a couple of singles, has released their first long player Et in Arcadia Ego – a vinyl-only independent release, no CD is planned, but I suppose that could change in the future, anything can happen. And of course, from their Bandcamp site all their recordings can be downloaded. One of the band’s members is guitarist, pianist and singer Matt Graboski, who has appeared in these pages previously, most recently as a member of El Sledge (+) which we reviewed in 2013. Matt is in fact the son of Jay Graboski, founding member of the 70s psychedelic turned Progressive band Oho, so Matt has great music running through his blood. The other members of Royal Architect are second guitarist Tim Yungwirth, bassist Ryan Finnerin, and drummer / singer Jason Butcher.

Et in Arcadia Ego contains the two earlier single releases “Echoes from the Cliffs of Bedlam” and “Let the Knives Sing” (probably the hardest rocker among them all) plus seven new songs. Their sound is an interesting mix of youthful power and feeling, lyrics delivered with raw feeling, great compositions, along with excellent but not too showy playing, all in support of the songs. Every time I spin this I take away a different feeling. Using a slower, less aggressive rock affected style, “Afternoon Phantoms” is particularly effective with its mysterious lyrics and building choruses that carry it to a powerful conclusion. There are all kinds of influences within these songs, and I suspect everyone in the band has spent a lot of time absorbing all the best rock music of the last forty or so years, therefore it’s hard to pin down discrete influences even within a single song. “This Cloak” is another standout, one of the longer cuts that begins in one space, goes through numerous changes along the way, and ends up in some place entirely different. The vocals throughout are at once aggressive and fragile, lending power and emotion to every cut. As an album of nine songs, it stands strong and reveals new insights and secrets on each repeat spin.

Budderfly - Budderfly – Not content with just Six North as a musical outlet, bassist Hideyuki Shima, drummer Hiroshi Matsuda, guitarists Takuni Seino and Shiju Odajima have come up with this band along with second drummer...  (2004) » Read more