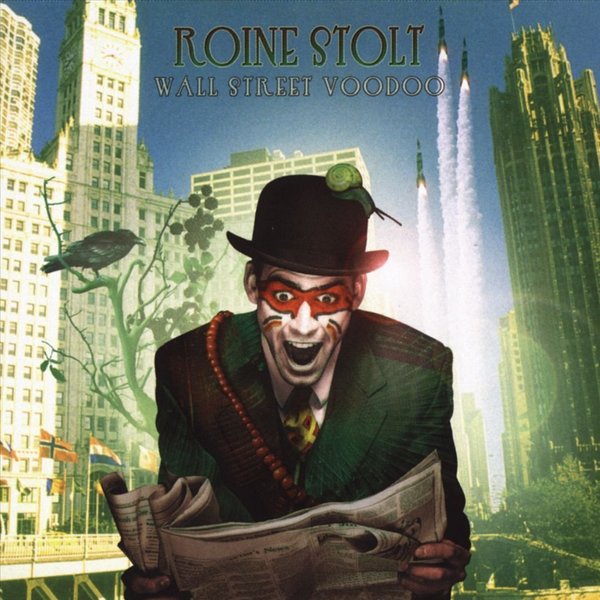 Roine Stolt has certainly been a prolific musician the last several years. The Kaipa, Flower Kings, and Transatlantic guitarist / vocalist has released what seems like a couple of albums per year since his comeback-even-though-he-never-left solo album The Flower King in 1994. Wall Street Voodoo is his latest outing and is a double album’s worth of blues-rock. Yes, that’s right. While there are a few forays into his trademark symphonic prog-rock sound here and there, for the most part this album is a stylistic throwback to the late 60s and bands like Cream, Traffic, and The Beatles. Fuzz tones and wah-wah pedals abound. Joining Stolt on this release are some past and present Flower Kings and Neal Morse, who shares lead vocal duties and also contributes some Hammond organ parts. Stolt’s guitar playing takes center stage here and he’s clearly in his element playing this sort of music. He lays down some great parts on the album. The guitar solos on “Dirt” and “Spirit of the Rebel” are especially good. “Everyone Wants to Rule the World” is very Beatles influenced piece. The solo at the end of “It’s All About Money” is quite jazzy and goes through some interesting modal changes. “The Unwanted” starts off as a slow Mississippi delta blues piece in 7/4 time, then mutates through a weird synthesizer solo middle section into a Beatles brass ending. The lyrical theme running through the album relates to the current materialistic state of society. The frequent vocals-through-a-distorted-Leslie-speaker approach on Stolt’s voice gets old after a few songs. On the penultimate track, “Mercy,” the essentially unintelligible lyrics take away from the impact of the nice acoustic guitar parts played underneath. Wall Street Voodoo contains some nice playing from Stolt and it’s a stylistic change of pace compared to his previous releases.