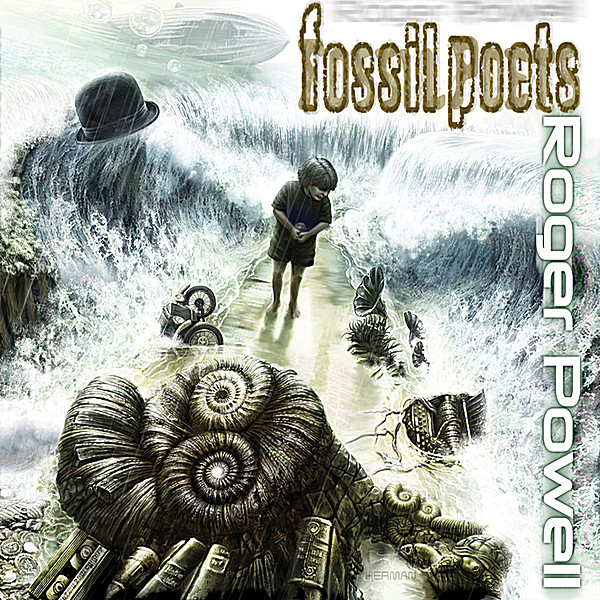 Roger Powell is best known as long-time keyboardist for Utopia as well as his early pioneering synthesizer records (Cosmic Furnace and Air Pocket). Fossil Poets is his first set of new recordings in quite some time; Powell has had a few compositional ideas which had not come to fruition until he met up with co-producer Gary Tanin. Tanin was literally instrumental in shoring up many of the keyboardist's arrangements as well as suggesting Greg Koch who fills a guitar ace role across the fifteen tracks. Best examples of this collaboration are the opening cut, "Lone Gunman," "Underwater City" and "Serpentine." "Gunman" slowly builds tension with Koch in the background eventually coming foreground in the moody track. "Underwater City" suggests simply that with a bubbly synth intro offset by Koch's understated hammer-ons and shuddering sound effects. Lastly, "Serpentine" is perhaps the most like recent Jeff Beck recordings also including guitar ace Jennifer Batten. The modern semi-techno rhythms offer much to the guitarist as a suitable platform for cranking up the amp and letting it fly. Two contrasting acoustic piano pieces are signposts on the disc: "Dauphine" and "Astrae." The former short piece carries a pensive autumnal theme while the closing track is lighter but still poignant. The mix across the disc is one of the key successes of the recording with a unique blend between electronics and instrumentals that generates a homegrown vibe. In summary, Powell and associates have created a project fans of Jeff Beck's recent work will fully embrace.