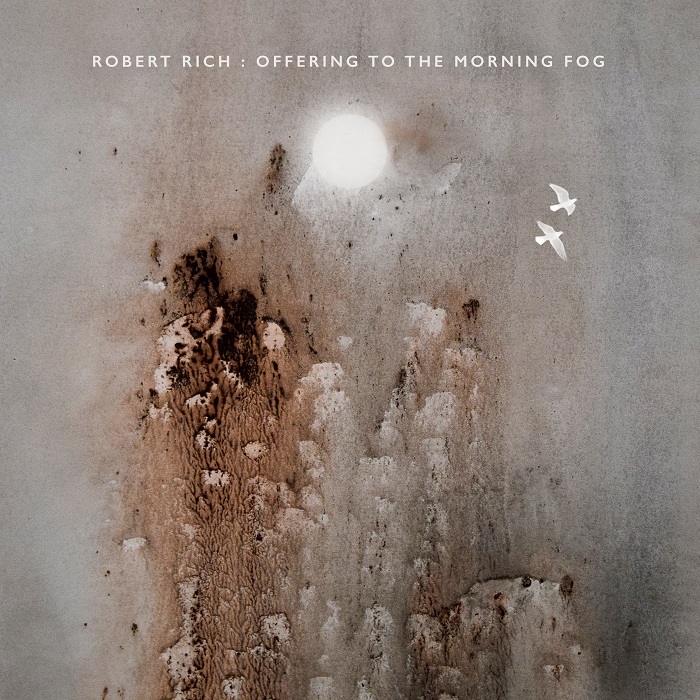 As the end of 2020 approaches, one may quickly recognize that it’s been an incredibly stressful year for everyone who survived it. Listeners who are looking for a way to de-stress might well find a quiet place to unwind in Robert Rich’s Offering to the Morning Fog, an album that was created expressly for that purpose in response to listeners’ requests. The six tracks flow together seamlessly, a gentle blend of textural elements, subtle melodic washes,. Shimmering flutes and samples, and dreamlike segues that a listener can easily float away on; in fact if one isn’t watching the counter, you might not even notice the tracks change as the album proceeds (or you might have a crappy stereo like mine that inserts a short dead spot between every index). The sounds are all heavily processed, but not to the point where one doesn’t recognize the source — every sound seems to wash together into a mystical envelopment that warms the soul and offers a space where a semblance of peace can be found. In general, the flutes take the lead while synths and darker textures whirr and rumble under the surface, blending with echoes from the surface and far above. Each of the six tracks, averaging between nine and twelve minutes each, has its own distinct character but often may go unnoticed as the pieces merge together so smoothly as they proceed. There are no sharp edges or corners, no chaos, no percussive elements to prevent a listener from drifting freely, the sound sculpture was clearly designed with meditation and slumber in mind, and indeed Rich is a master of this craft, though to draw a distinction between this and his earlier Somnium (2001) or the even longer blu-ray Perpetual (2014), both of which were recorded to guide the listener to sleep and keep you in that state, Offering to the Morning Fog offers more body, shimmer, color and contour as it proceeds. Those who download the album will get the six tracks as well as a seventh, an hour-long-plus concatenation of all six with zero breaks. A truly contemplative journey that soothes the soul.