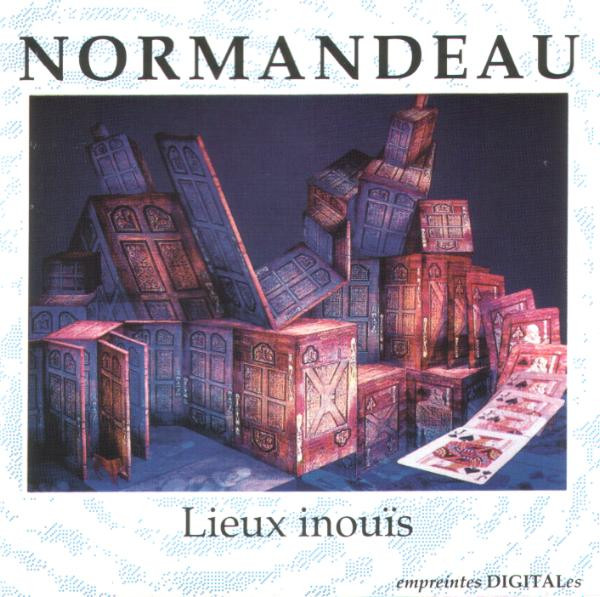 Lieux Inouïs (Unheard of Places) is a digitally remixed reissue of Normandeau’s 1990 debut release. Normandeau is one of Canada’s premiere electroacoustic composers and Lieux Inouïs is a collection of five compositions recorded between 1985 and 1989. The order on the disc is from newest to oldest. The opening composition, “Jeu,” is 24 minutes of sonic cinema based on different uses of the word “jeu,” French for game or play. This is a playful piece utilizing somewhat realistic and often unrecognizable sounds that metamorphose every one to two minutes. “Jeu” has a distinct Stockhausenian feel with its use of multi-layered sounds. In fact excerpts of Stockhausen’s “Hymnen” appear along with children at play, jazz music, crashing chairs, jack hammers, etc. The next composition, “Mémoires vives,” is Normandeau’s study of a requiem. Etheral choirs accelerate and spin in and out of hearing alternating with electronics and sampled acoustic instruments. This is an interesting piece that can at times sound coldly sterile and then warmly engaging. Stepping back now to 1987, the third composition is “Rumeurs (Place de Ransbeck),” an electroacoustic piece best thought of as an acoustic analogy of a rumor. Again, a collage of elusive sounds that scurry away as you try to study and identify them. It does have some similarities to Pink Floyd’s “Several Small Species …” The fourth composition is "Matrechka." Just like the nested Russian dolls, "Matrechka" is a series of musical unveilings revealing smaller and more interesting “dolls.” The disc closes with the oldest and shortest composition “Le Cap de la Tourmente.” This is a piece of drones that cycically sweep across the sonic space alternating appearances and disappearances of the sculptures is was composed to accompany. Lieux Inouïs is a diverse collection of fairly accessible electroacoustic music and is a good introduction to the genre.