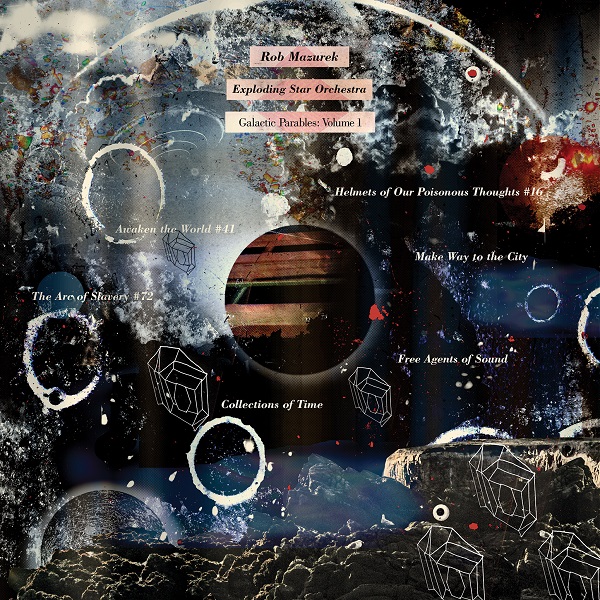 With Galactic Parables: Volume 1, Rob Mazurek shows that he truly has earned a place in the ranks of the masters of large ensemble, high concept art jazz, that realm inhabited by George Russell, Sun Ra, Wadada Leo Smith, and a few others. The first CD features a ten-piece group recorded live in Sardegna, Italy in August 2013; the second has eight players (one one of whom wasn’t on the Italian set) at a concert in Chicago in October 2013. Interestingly, the same compositions feature in both sets, though in different arrangements: for example, “Free Agents of Sound” comes in over 20 minutes in Italy, and only 11:27 in Chicago. This serves to highlight how loosely structured Mazurek’s pieces are, with lots of room to wander as things happen. The vocal bits (spoken, sampled, manipulated) are only partly the same between the two versions, and there are some chordal and melodic fragments that appear in both, but the solos are different, with the piano and drum solos omitted from the shorter version, though the guitar solo is longer. Other pieces have similar variations. The musicians in common between the two dates are Mazurek (cornet, electronics), Damon Locks (text, voice, electronics), Angelica Sanchez (piano), Jeff Parker (guitar), John Herndon (drums), Matthew Bauder (tenor sax, clarinet), and Matthew Lux (bass guitar); the Italian show adds Chad Taylor (drums), Guilherme Granado (keyboard, samplers, synth, voice), and Mauricio Takara (cavaquinho, electronics, percussion); the Chicago show adds Nicole Mitchell (flute, voice). As you can tell from the instrumentation, this is not traditional jazz in any way. It is, however, exactly what I think jazz should be – adventurous, improvisatory, bringing together sounds spontaneously, free-spirited, unpredictable.

Cyrille Verdeaux - Messenger of the Son – Verdeaux' name should be familiar to many, he was the main mover in the intensely symphonic seventies French band Clearlight, whose first two albums Symphony and Forever Blowing Bubbles are essential...  (1996) » Read more