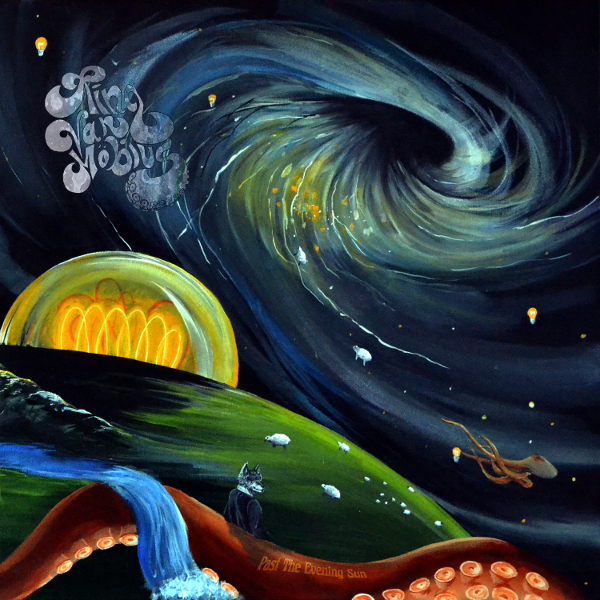 If you’ve got an itch that is scratched by Il Balletto di Bronzo and Van der Graaf Generator, Ring van Möbius is here to help. Not that they’ve copied the Balletto or VdGG sounds precisely — they just operate in the same general area and do it really well. Classic keyboards, grand melodies, heavy riffs, complex compositions, all can be found in the three tracks that make up Past the Evening Sun. But there’s more, including some spaced-out sections with spoken words and some edgy saxophone. The title track, a side-long epic stretching nearly 22 minutes, starts with a moody prolog featuring multiple synthesizer parts weaving around each other, with an organ sneaking in to introduce a great riff belted out by bass guitar, organ, and sax. After a sax solo, there’s a section with long organ chords backing a vocal part with ethereal backing vocals. In spite of the lack of guitar, the band definitely leans more towards an Italian sound than ELP. Organ is the most widely used instrument, but Mellotron, clavinet, and Minimoog-like sounds are widely present. Thor Erik Helgesen is excellent on the keyboards, though not necessarily flashy, and his vocals are pleasant and melodic, with occasional touches of grit but not harsh. The Van der Graaf comparison is courtesy of the sax, which is contributed by guest Karl Christian Grønhaug — his wild playing provides a great counterbalance for all the keys, further proving that a guitar is not needed. Bassist Håvard Rasmussen is solid, often opting for a gritty tone, sometimes kicking in the fuzz pedal for extra impact. The other factor is drummer Dag Olav Husås, who supports the music perfectly, driving the riffs when it’s needed or setting the mood with more ambient sounds in the quieter passages. He even adds timpani to great effect on "End of Greatness." There is no shortage of good progressive bands coming out of Norway and Sweden these days, and many of them have a strong presence from classic keyboard sounds, but Ring van Möbius has enough to set them apart from the pack to be worth checking out. In fact, the quality of the compositions and the emotional flow of the music is very appealing, so in the realm of classic-style progressive rock, Past the Evening Sun is sure to be among the highlights of 2018.

Buckethead - Monsters and Robots – For readers of superhero comics, the Origin issue was always a treat. How did Radioman develop the ability to project radio waves from his eyes? How did Buckethead get his name and strange persona? On...  (2000) » Read more