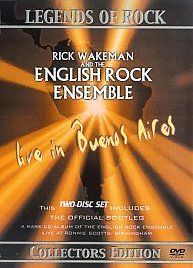 One of Rick Wakeman’s several visits to South America gets the DVD treatment with this unique packaging of DVD and separate CD. Damian Wilson is Rick’s newest singer and his lead vocal captures the spirit of Deep Purple’s Ian Gillan. In fact the band’s hard rocking style makes this one of the best performances from Rick’s classic catalog. Ant Glynne on electric guitar gets a much freer rein on most of tracks, adding slide guitar to the Journey to the Centre of the Earth medley and even replacing trademark solos on “Merlin the Magician.” Rick’s son Adam is also on board as second soloist on “Merlin” and even faces off with dear old dad for some front stage antics. Long time drummer Tony Fernandez is back and is the rhythmic glue for the ensemble. Probably the best pieces on the DVD are “Lancelot and the Black Knight,” where Wilson’s lead vocal supersedes the original by far, and the group’s take on “Starship Trooper,” where everyone gets a chance at a solo spot. The CD portion of the release is a completely separate gig and line-up with only Tony Fernandez, Adam, and Rick overlapping in personnel. Best tracks include the medley of “Robot Man/Paint It Black” where vocalist Chrissie Hammond belts out a blues based lead that fits quite well with Rick’s soloing style. Overall the sets give a solid representation of Rick’s current solo endeavor.

Sylvan - Deliverance – Here's a well-recorded album by an obviously polished German group filled with interesting ideas. I'm sorry to say that those ideas don't always work, such as "A Fairytale Ending," but I appreciate...  (1999) » Read more

The Stones Remain, the Soft Boys Are Gone