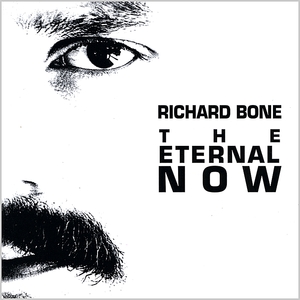 With four releases under his belt, Richard Bone has touched on a variety of different musical avenues, of which The Eternal Now is his nod to the New Age / ambient realm. While I'm usually loath to making simple comparisons with other artists in a review, Richard's CD made it too convenient not to do so. The first half of "The Eternal Now" is entitled Zone, and is broken into six parts. "Zone One" almost hints at Fripp & Eno territory, though created by more orthodox means. Still a nice moody work with rippling waves of sound. Parts two and three were rather conventional, and sometimes spoiled by samples of Star Trek bleeps, or the laugh of a little boy. On "Zone Five" he picks up the pace. This one was perhaps reminiscent of Harold Budd's The White Arcades, but with a rhythm. Not bad at all; while the sixth rocked back and forth like a boat on the horizon — a stronger melodic sense pervading it, reminding me of Jon Mark's album The Standing Stones of Callanish.

It was the second half, The Millennium Pages, where things started to gel into a coherent whole. Parts one and two here see him dabbling in a cosmic and floating atmosphere of sound that is more serious. And the third introduces harp for a good bit of contrast. This one recalled Kitaro. Finally there is a weird droning piece that creates a disturbing mood. To size up The Eternal Now, I'd say that the second half is more consistent, though somewhat derivative of what people like Klaus Schulze, et al. have done. The Zone half may be less appealing to fans of this genre, but it shows greater compositional dexterity. Overall this release presents itself as somewhat of a grab bag of ideas — like a collection of miniature soundtracks. Some listeners may feel this is too multi-faceted for a single work. It could have probably been spread over the output of two or three separate recordings. But that's not to say that these styles aren't related. If a little variety in the meditational music field is what you are looking for, rather than an album that sits on one direction, then is just what the doctor ordered.