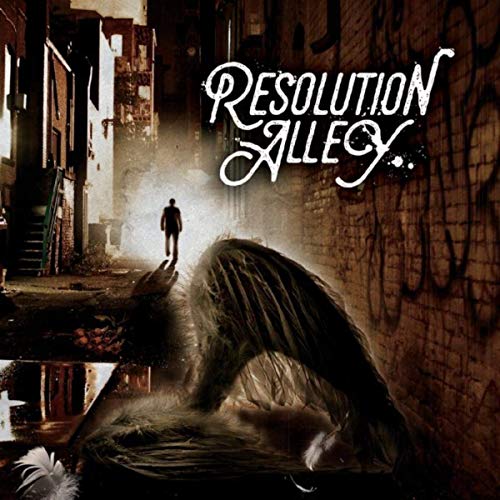 This four song EP is the debut release from Resolution Alley, a project of Baltimore based composer, bassist and multi-instrumentalist Jason Wilson, who sang on the first CD by Dark Aether Project, and around the same time was the leader of a band called Emerald Tiers, which morphed into Sustained in Jade. I can’t say I’ve heard either of the latter two, but I have that first DAP album and it’s excellent. He’s also been involved with a lot of other musical projects over the years, too many to go into at length here, but if Captain Squishy’s Yee Haw Jamboree rings a bell, Wilson was part of that too (sorry, just had to get that name into the review somewhere!). Throughout this EP Wilson plays bass, keyboards, and sings. And on the latter three tracks is joined by female vocalists Laura Van Duzer, Brynn Williams, and Dani Danger Stoller, track depending. Various guitarists and drummers join in the project, even an additional keyboardist on on the final cut “Romantic.” So what does this sound like, anyway? The first cut, “Scratch the Surface,” starts in typical ‘indie’ territory but quickly sheds its skin and moves into more interesting regions, reminiscent of some of the more intelligent elements of 80s pop like Tears for Fears (among many others), not really prog as such, but certainly on a comparable artistic level. The second cut “My Foundation” continues in a similar vein, starting with a short rapping bit but shortly after adds Van Duzer’s vocals changing the mood of the piece completely, which continues through the final five minute track “Romantic”; by this time I’m starting to be reminded a little bit of the Brooklyn based band The Knells (which features three female singers), although Resolution Alley is a bit more streamlined and might even be considered radio friendly in a 1980s sense. Nonetheless, this is an excellent debut, but at only four cuts and fifteen minutes total length, it leaves a listener wanting more. Hopefully a full length release will be forthcoming.