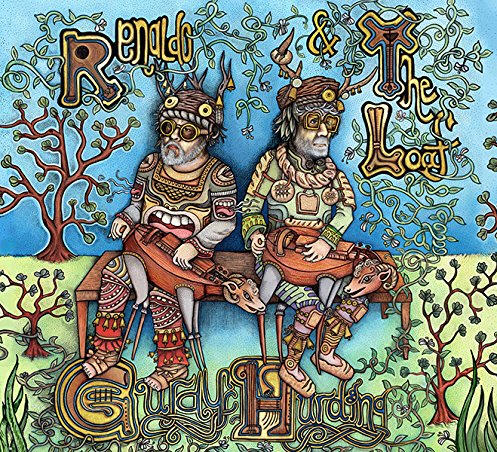 Back in the early 1980s, Renaldo & The Loaf were like, the weirdest band in the world, sort of like the British answer to The Residents, though somewhat different, without all the anonymity and mystery, even doing a split-album on Ralph Records with the eyeball boys, 1983’s Title in Limbo, which is where many of us heard of them the first time. Their music was truly bizarre, fusing low-fi tapefoolery with dadaist concepts, making the most avant-garde music using strange sounds and assumed voices, truly a product of the studio, the duo almost never played live. By their 1987 album, Elbow Is Taboo, the duo’s energy seemed to have worn down and it seemed like the end was near, and indeed not much was heard from them after that. Until 2013, when a reissue program began resurrecting their works, each including an extra disc of out-takes and rarities, beginning with their 1981 masterpiece and arguably most popular title Songs for Swinging Larvae. By 2016, everything had been reissued on CD, and the interest that was generated by it all inspired the duo to regroup and create some new music together after a 25 year long absence. So do they still have what it takes? I’m happy to report that Gurdy Hurding finds the duo in a much more creative place than where they left off in 1987. On that last album time they had begun working with primitive sampling equipment (as opposed to their earlier work with tape splicing) but hadn’t quite tackled the processes. After all these years technology has become their ally, and in fact much of what is here is built up from multiple layers of samples. On the very first spin some of these pieces like “Early Twirly” and “A Convivial Ode,” built from vocal and string samples, will jump out and grab the listener and pull you in. On subsequent listens the mere strangeness of the album’s eleven other songs will definitely leave their mark on your psyche, though not in the crude lo-fi way their earliest albums did, instead now utilizing all the latest music creation tools that are available today from a similar frame of reference. All taken, Gurdy Hurding marks a solid comeback for Renaldo & The Loaf, hopefully the first new album of many.