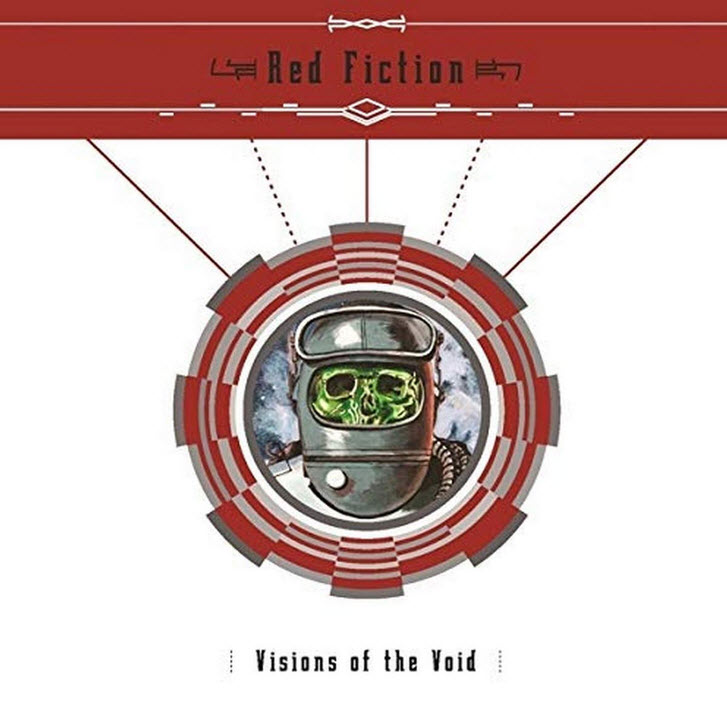 At some point after their 2014 debut Swarm, amid the regular turnover that a band would go through over a six or seven year period, San Francisco bay area band Atomic Ape changed their name to Red Fiction, but the essence of the band is still the same: chief composer, band leader and multi-instrumentalist Jason Schimmel (ex Estradasphere, Secret Chiefs 3, Don Salsa) is the band’s guiding force and producer, playing guitar, bouzouki, keyboards, and sitar; Ryan Parrish plays tenor sax, baritone sax, and bass clarinet, and Trevor Parrish plays trumpet and flugelhorn. Rounding out the lineup we have Max Whipple on accordion, Mike Lockwood on drums, and Rusty Kennedy on bass, plus a large number of guests, track depending, including violist Eyvind Kang, vocalist Jessica Kenney, percussionist Peter Valsamis, and others. Not surprisingly, Visions of the Void explores much of the same musical territory as its predecessor, and perhaps even more. The eleven tracks are exercises in crazy genre-jumping that can start on one side of the world and end up on the other, what’s rooted in the past one minute might be launced into the future the next — all within the same track! The music here doesn’t rely so much on technology as it does pure musicality and an explorative attitude. Elements of East European folk music, heavy metal, jazz, fusion, klezmer, surf-rock, avant-garde, and experimental sounds all blend seamlessly into a potent stew of styles that pack a surprise in almost every measure. Rhythms cut from simple to odd time and back again with regularity, packing an aggressive punch and mysterious levels of mayhem along with it. Maybe you remember Estradasphere, right? Kind of like that level of craziness and insanity but without the video game soundtracks. Hardly a measure goes by without an unexpected surprise, a missing beat or two, a twisted melody getting turned back on its head. This music is like a downhill train going so fast it’s about to jump the tracks, you’re hanging on like that will happen but somehow you survive it, and go back again and again like a crazy kid at a carnival ride. Eventually, after a dozen or more spins, one starts to get used to this level of excitement, but there’s always something new that you didn’t catch the last time through. For those who like ubridled musical excitement, Visions of the Void is the prescription.

Martin Gordon - God's on His Lunchbreak (Please Call Back) – Now that bassist Martin Gordon has established himself across two creditable solo records together with a crackshot band that suits his clever muse, it’s clear that he has some more pop rock damage...  (2006) » Read more