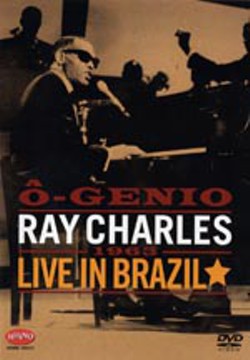 Not long after releasing one of the signpost LPs of modern pop crossover, Ray Charles took his big band to Brazil and filmed two television programs featuring his live stage set. Charles was just as much a jazz innovator as he was a masterful icon of soul, gospel and pop fusion and it shows in this collection of rare performances. His live show reflected his passionate unique skills set as lead vocalist and nimble piano accompanist from his standard live repertoire. The stark genius is more apparent in these forty-year-old tapes than with the recent Hollywood biography as evidenced by the inclusion of standards. Songs such as “Hit the Road Jack” and “I Can’t Stop Loving You” were mainstays of AM radio during this time-frame and on the live stage they shine brightly. Charles was touring to support Modern Sounds in Country and Western Music which was as popular as it was controversial for the day. Many of his arrangements of country classics such as “You Don’t Know Me” would be associated with Charles over the original performer of the track. Set #1 opens with a blistering version of “What’d I Say” the singer’s first big hit. Other pieces such as the classy instrumental, “Moanin'” show the entire ensemble establishing a smooth chart before the pianist himself takes a solo. David ‘Fathead’ Newman is seen clearly in the front saxophone line along with several other mainstay players of the day. It is also important to note that both sets contain good versions of “You Are My Sunshine,” but it’s the second performance of the traditional piece that stands out as Charles’ backing vocalists carry the piece home. Overall the singer’s stature as one of the most important artists of the 20th century is confirmed by these seminal live recordings from the distant past.