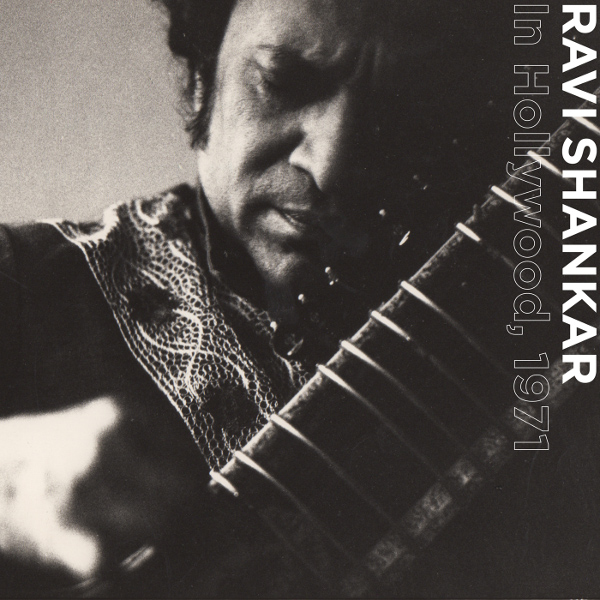 Reviewing an artist like Ravi Shankar is quite a challenge, and this live set from 46 years ago presents the difficulty in a big way. In Hollywood, 1971 gives us four pieces spanning over two hours. Part of it was originally released on a double-LP set earlier in 2016, but for the CD version, the entire concert is intact. This is definitely a case where the LP format has drawbacks: two of the ragas had to be split across sides, and the third (“Hollywood Raga Vibhas”) was omitted entirely. So light up some incense, turn out the lights, and picture yourself in the home of Ravi Shankar on Highland Avenue in Hollywood, California. The date is June 12, 1971, and you are ready to drift away on magical sounds. The maestro is joined by Alla Rakha on tabla and Kamala Chakravarty on tambura, both of whom appeared with him at the Concert for Bangladesh the following month. The trio presents a masterful performance, executing the traditional form with telepathic ease, building slowly from meditative wanderings to tightly coordinated rhythmic passages. To one not trained in the esoteric details of this music, all you can do is surrender your mind to the flow and enjoy the play of sounds on your consciousness. Obviously this is not music for people in a hurry — listening is a commitment, though I suppose it could function as background music for doing other things. Far be it from me to tell anyone how to listen to music, but this collection certainly rewards closer attention. Is it better than other classic Shankar recordings available? I have no way to judge that. All I can say is that it’s marvellous, and for anyone who wants to have some sitar music in their collection, this is a worthy choice. The sound quality is stunning, crisp and clean and filled with presence. In addition to its value as an artistic statement, In Hollywood, 1971 serves to take a private concert witnessed by a handful of lucky individuals and make it available to the world at large, preserving a little corner of history.