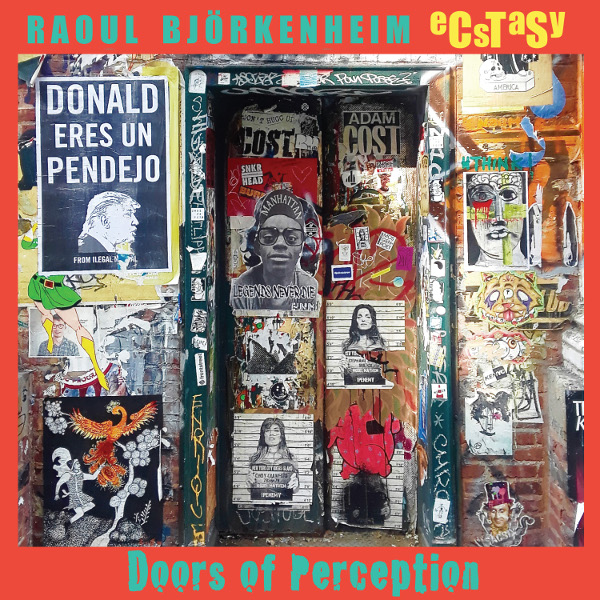 For the third outing with his Ecstasy quartet, Raoul Björkenheim continues to delve into the possibilities of electric guitar combined with saxophone, upright bass, and drums. This highly improvisational material is primarily defined by the distinctive playing of the musicians involved. Björkenheim’s guitar is likely well known to our readers, as we’ve been covering his recordings for 20 years now, going back to Krakatau. Whether waxing meditative with a clean tone and unusual voicings or bursting out with a raging wall of distortion, he is one of the most original guitarists in any genre. Pauli Lyytinen plays saxophones of several sizes, from bass to soprano, as well as wood flute, and his work is analogous to what Björkenheim does on the guitar, taking advantage of the full range of the instruments and presenting a balance of melodic and edgy tones. Two of the album’s highlights come from his use of less common instruments: his wood flute on “Surf Bird” is lovely, with a fluttery, um, bird-like quality that works well on conjunction with the sparse, echoing guitar parts, not at all resembling typical surf music; and on “Talkin’ to Me?” he goes for the deep low end with a bass sax part that provides a gritty doubling of the bass line to back a nasty guitar lead that nods obliquely to the blues, then takes off with a tortured solo of its own. There are also occasional effects used on the saxes for additional variety. Jori Huhtala doesn’t take the spotlight often with his bass playing, though his role is absolutely essential for the music to function, providing both a tonal and a rhythmic anchor. Markku Ounaskari is a very interesting drummer, providing a little extra touch of unexpected color to several of the tracks by venturing beyond the typical ways of playing a drum kit. It’s hard to tell exactly what he’s doing without watching him, but there are lot of sounds that do not seemed to be produced by simply hitting a drum head or a cymbal with a stick. And for another virtue, Doors of Perception consists of ten tracks, all under six minutes, for a total of only 43 minutes — a perfect taste of invention that never outlasts its appeal and never ventures into lengthy soloing. Yet another win for Raoul Björkenheim.

Steve Gorn, Tony Levin, Jerry Marotta - From the Caves of the Iron Mountain – Take a woodwind player and the early 80s rhythm section for Peter Gabriel (circa Security), put them together in a cave and you'd be surprised what they come up with! The second release from King...  (1998) » Read more