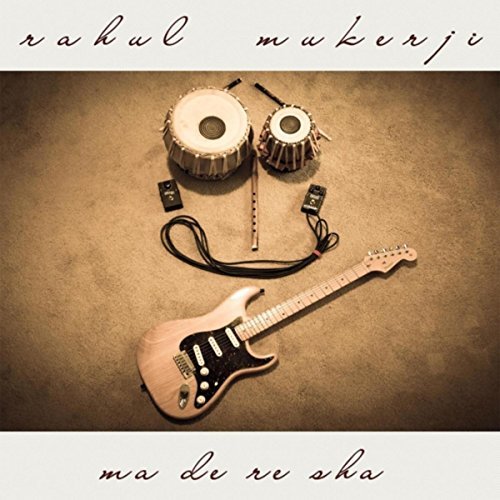 Indian born American guitarist Rahul Mukerji has had a 15-plus year career performing live on the US East Coast and in his native India, on numerous recordings as a featured player, and has even done some soundtrack work overseas. Now after all these years and five years of composition and preparation, he presents his first solo album of instrumental tunes, Ma De Ra Sha (the title tune is the battle cry of his close friend’s two year old daughter!), twelve succinct tunes that showcase his compositions and chops, brilliant melodies and inventive arrangements, one foot in his Indian culture and the other foot firmly in American instrumental rock, drawing influences from both and freely superimposing them on each other. Mukerji plays all guitars, guitar synths, tablas (exceptional percussionist!), and there’s a picture of an e-bow next to the credits, which speaks for itself. Joining him are bassist Ruben Rubio and drum and percussion programmer Bruce (no surname given), plus others doing the production backline, mixing and mastering. One is just as likely to find tasty dreamy classical licks layered over one another in a warm emotional context, as one might find an abundance of blistering electric shredding over a roadbed of tablas and percussion, with driving bass moving the rhythm forward. There’s a lot of variety among these dozen cuts to absorb, all performed with impeccable power and precision. Let's hope there is more to come.

Jan Hammer - The First Seven Days – Ah, for those simpler days, before New Age fossilized into colorless bits of seemingly nutritious but flavor-free soy-based meat substitutes, before anyone realized that there was no place for...  (2005) » Read more