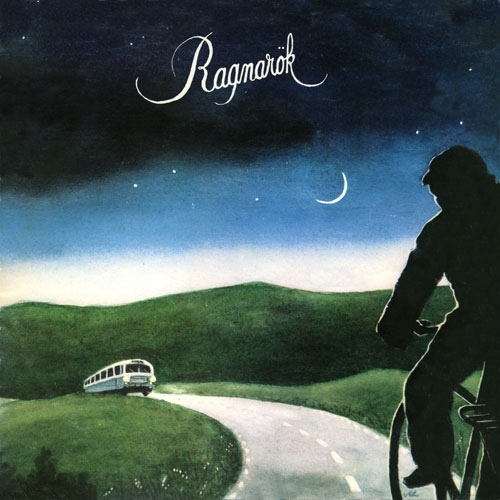 Unlike a lot of prog-rock groups who try to impress the listener with lots of flashy solos, using overdubs and multiple keyboards like so much musical spackle, the Swedish group Ragnarök proceed in the other direction. There are no wasted notes, no excessive over-arrangement. The instrumentation consists solely of two guitars, bass, pianos/flute and percussion. The economy and subtlety of the resultant music is actually quite charming. On their first album, Ragnarök make a gentle, melodic brand of fusion that is uniquely Scandinavian. The pieces range from introspective sound etudes for flute and acoustic guitars, to more rhythmic, jazzy pieces with tasteful use of electric guitar and Fender piano. The lengthy "Polska från Calmar" is probably the best of the jazzier pieces, with some choice guitar soloing. An unintentionally humorous note is struck in the bouncy "Fabriksfunky," which includes an electric piano motif which sounds uncannily like the incidental music to Charlie's Angels. I think we can chalk this up to coincidence. This album is very nice, and I like it a lot. If one doesn't mind that it's a good deal less complex and ostentatious than prog fans are usually expecting, it should be quite simple to enjoy the natural pleasures of Ragnarök. One sincerely hopes they have foresight to release their excellent second album, Fjärilar i Magen.