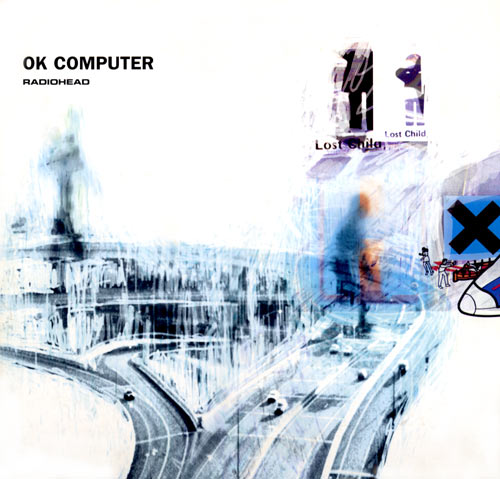 We can all think of examples of a progressive band over time starting to play music more in the mainstream (Genesis, Yes, pick your example), but how many times have we seen a mainstream band, as their career evolves, do the opposite? It may be too soon to tell if Radiohead is headed that way, but OK Computer in many ways works as a progressive album. To a listener grounded in the prog-rock idiom, it sounds reminiscent of mid-70s Pink Floyd and late-70s Hawkwind/Hawklords, though not in a derivative way. And it also manages to sound thoroughly modern, with the technological sheen that is only now becoming possible. The song “Paranoid Android” serves as a nutshell portrait of the album’s style. At over six minutes, it’s quite long for a single. It starts quietly with an acoustic guitar and a high, waifish vocal. Electric guitar provides slightly wah-wahed fills a little reminiscent of Dave Gilmour. As a background to a chorus section, a strange voice speaks in the distance. The second verse is a little louder than the first, and after the second chorus, a new riff is introduced on acoustic guitar. The riff is joined by an electric piano. After a bit, heavy electric guitars come in on the riff. Sometimes the four-beat pattern switches to seven under an almost atonal guitar solo. This is followed abruptly by a hymn-like keyboard section with vocal aahs which builds over the course of two minutes and adds a countermelody. Then the heavy riff crashes in again, doing the four and seven thing, for a brief loud section to finish it up. With this album, Radiohead has upped the level of complexity (in composition, arrangement, and concept) attempted by a post-Nirvana “alternative” pop band. The market will determine how widely accepted the experiment will be; but I’ll wager that many old prog-heads like me will find it challenging enough to bear repeated listening.