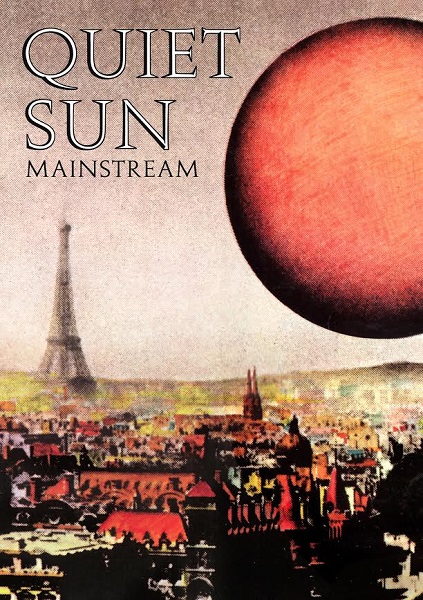 It’s common knowledge that long time Roxy Music guitarist Phil Manzanera recorded both his first solo album, Diamond Head at the same time as his pre-Roxy quartet, Quiet Sun, recorded Mainstream. Coordinating those furious sessions, of course, meant long nights, excellent brew, and cross-collaboration with both Roxy alumni as well as reconvening the old band to reinvent song arrangements and create something fresh. The new Expression records edition of Mainstream shows the quartet as anything but a conventional rock act struggling to establish a unique identity but in the best possible fashion. This album is clearly the other side of the musical coin with distinct variations on Diamond Head. Does the recording stand the test of time? The answer is a resounding yes despite no substantial sound improvements for this reissue. The songs and understated nature of the project made the recording almost a tribute to the previous incarnation of the band with hints of the 801 Live to be. Probably the best piece is still “Mummy was an asteroid, daddy was a small non-stick kitchen utensil” due to both keyboardist Dave Jarrett’s and Manzanera’s playing. Demos of the band’s early works which were sent to various record labels of the day are included (as well as the rejection slips) which further reveal Jarrett as the Mike Ratledge acolyte he truly was. Pieces such as “Years of the Quiet Sun” and two differing versions of “R.F.D.” show the organist and the entire band in fact playing in the wonderfully twisted Soft Machine improv style as signposts for them to finding their feet. Also it’s especially quite cool to hear Manzanera’s soaring leads on those tracks. The bonus tracks are an essential part of the band’s history and do not detract from the cohesion of the original album. “Talking History” in fact documents a reconvening of the three surviving members to mull over the good ole days. The packaging is a collector’s dream, if a little hard on the eyes, that conveys how little notice the band received early on, and later the complete opposite. The small book packaging is complete with an excellent set of reviews (not necessarily favorable) and memorabilia. Especially of note is Island records chief Muff Winwood’s rejection letter. It’s ironic in that they were later signed to the same label. Highly recommended.

Unitopia - The Garden – It is quite ambitious for a group to issue a double CD of new material as their second release. Many groups are challenged to fill one disc with decent music, let alone two. In addition, much of the...  (2009) » Read more